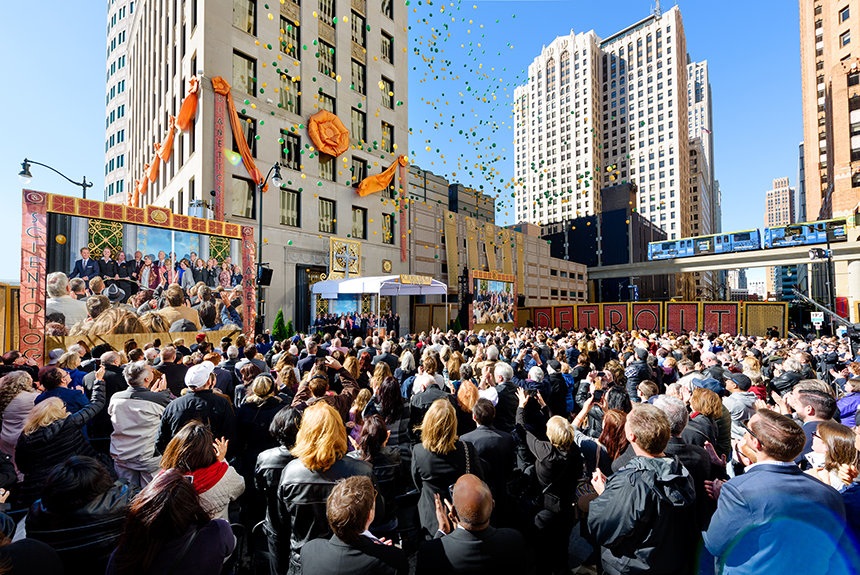 The California-based Church of Scientology, which has had its share of controversies since its inception in 1954, and counts actor Tom Cruise among its notable followers, celebrated the opening of its new church Sunday morning in the freshly renovated eight-floor building at the corner of Griswold and West Jefferson in downtown Detroit, the Detroit Free Press reports.

Cruise didn't attend the celebration, but hundreds of others did, including those from as far as New Jersey and Georgia.

Security — and lips — were tight. Members sported wristbands to show they had been invited. Large signs reading "DETROIT" blocked off the street view of an ornate stage, complete with a towering cross, while security guards patrolled the grounds of 1 Woodward to block entry from that side.

More than 10 attendees declined to speak to the Free Press, but others offered a few insights into the day's fanfare. Alan Kellman, who works as a lawyer in the Penobscot building and has been a Scientologist since the 1970s, said that the new building could help Scientology reach millennials and other Detroiters who are joining in on downtown's revitalization.

Founded by L Ron Hubbard, the religion has been the subject of criticism. An HBO documentary "Going Clear" featured some former members alleging abuse and intimidation by church leaders. Hubbard passed in 1986.

The Church of Scientology webpage says:

Today the drive to “take back Detroit” is fueled by a fiercely contagious pride, and the Church of Scientology is a vibrant part of the engine powering that effort. A presence in the city since 1963, it was on a bright fall Sunday in mid-October that a crowd of more than 2,000 gathered at Jefferson Avenue and Griswold Street downtown to celebrate a glorious new Church come to life.

Mr. David Miscavige, the ecclesiastical leader of the Scientology religion, led the dedication ceremony to officially open her doors. In his opening address, Mr. Miscavige spoke to the magnitude of the moment and exactly what this new Church of Scientology symbolized. Namely, “not a revolt, not a wish to change any Man’s religion, but the hope that Man can find his own feet in this highly confused and mechanistic world. And if he can do so, then perhaps he can also recover the happiness, sincerity, love and kindness with which he was created.”

“You Can’t Hurry Love” as the song goes, but for all those in attendance there was “Dancing in the Streets.” The grand opening pulsed into motion with the iconic sounds of Motown and quickly segued into a variety of community and civic leaders extending congratulations.