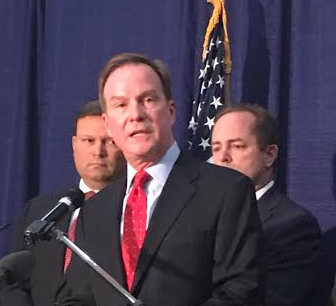 A Republican source recently told Deadline Detroit that gubernatorial candidate Bill Schuette has been pressing supporters for more contributions down the stretch.

Could it be Schuette is not getting what he hoped for?

One possible sign that campaign finances are tightening: Schuette is canceling planned TV ads across Michigan in the race's final week, except in the Detroit market.

Schuette on Tuesday nixed $445,000 worth of commercials on stations in Grand Rapids, Flint, Lansing, Traverse City and Marquette, the Associated Press reports. A planned $441,000 ad buy in metro Detroit is intact. An aide says the campaign does not comment on ad strategy.