LeDuff: Anthony Bourdain 'Cared for People in a Time When Too Few Do'

"Can I get another?" Tony asked, looking lustily at the pack of Winstons on the seat of my brother's old Checker cab.

"I'm really not supposed to be smoking," he informed. "I've got a touch of emphysema."

"How the fuck do you get a touch of emphysema?" I asked.

He'd been smoking like a pile of burning leaves. This must have been his fourth.

He torched up a cigarette -- the last in the pack-- and leaned out the window like a long, silver-haired wolfhound, exhaling a plume across Chene Street. Anthony Bourdain -- elegant bad boy, epicurean, swashbuckler, the world's most interesting man -- was afraid the dash cam would capture him smoking and his part-time wife would find out.

His true wife, of course, was the road, shooting 20 episodes a year for his CNN show "Parts Unknown," jumping from the Congo to Tokyo and now for the season finale -- Detroit. It was a warm July in 2013. 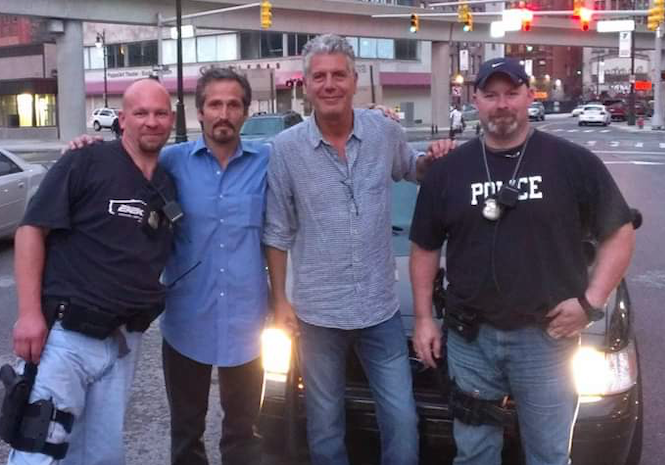 I pulled over to the liquor store to get another pack of smokes, six bottles of Heineken and a bag of pork rinds. He offered to pay, but his hand moved conspicuously slowly for his pocket.

We stood on the corner and drank the beer. This made him nervous. Not the surroundings of broken glass and broken people and gaunt dogs. But the schedule. We were freelancing and behind time.

Tony, it quickly became apparent to me, was a stickler, a punctualist, a neurotic wound tight like a pocket watch. The shoot for his show had been planned to the minute, but I had convinced him to take a ride to parts unknown and unplanned and unmanaged.

I pointed out a ghost garden, those snatches and riots of flowers and fauna that grow in the front yards of long-abandoned houses, a reminder that people did and still do live here. He understood the sentiment. It captured his imagination and became the long, languid close of his Detroit story.

Many in the metro area hated the elegy of the city. And I can understand that. After all, someone's grandmother lived in that house. And we, her grandchildren, are still alive. One prick I know said he concentrated on dirtbags and losers. I will never forgive that.

Sadly, Tony took his life this year at the end of a bathrobe belt. He was 61, the same age as Ernest Hemingway when he took his life.

Even the world's most interesting men hurt. The news of his death still makes me hurt. 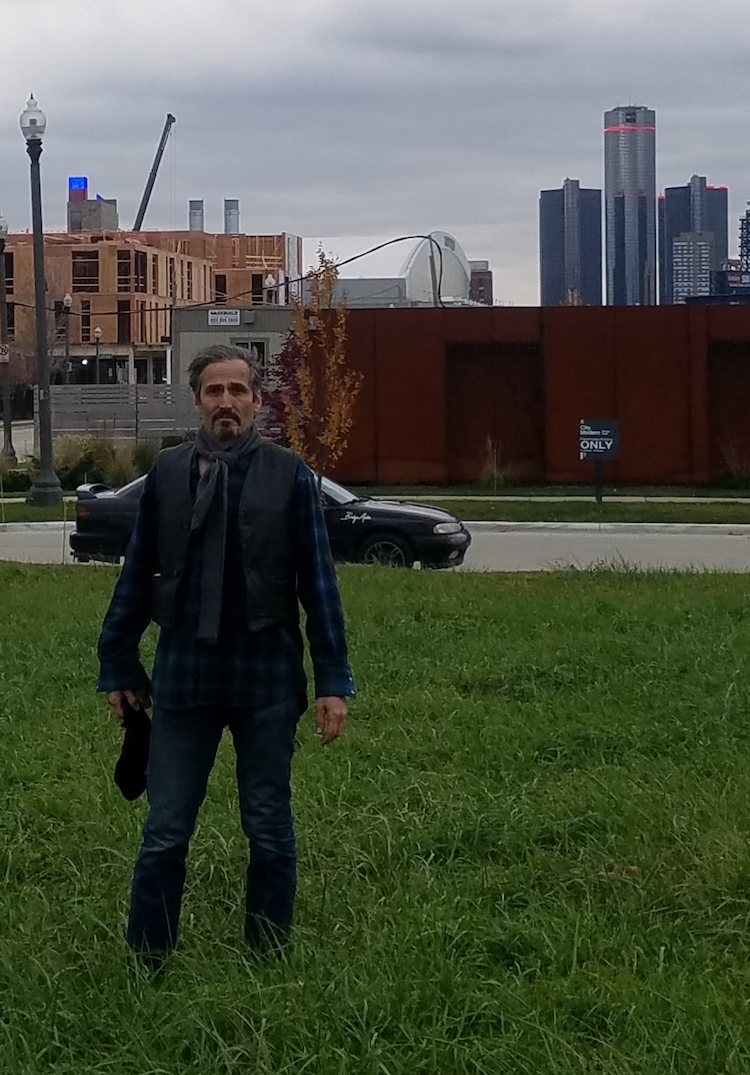 I was driving by that liquor store the other morning in the lonesome rain, and decided to visit a few places we visited. How did Detroit look five years later? Five years after the bankruptcy? There is the mega-development downtown, much of it financed with tax breaks and public dollars. We know that much, and that much is all we seem to acknowledge.

But like Tony wrote: "Empty lots and burned-out buildings are bad. But are cupcake shops, galleries and artisanal baristas necessarily better? Maybe, probably, but maybe not. And we better ask ourselves if that's what we want."

I was introduced to Tony in the late 90's by his mother Gladys, who was my copy editor at The New York Times. He was a cool enough guy, New York to his core, ragged, wise-assed. urbane and tall. Then he hit it big with the book "Kitchen Confidential," the insiders bible to chefs everywhere. He parlayed that into a traveling food show for the next 16 years.

He craved the authentic, a whiff of the dignity of the person who made the food as much as the scent of the food itself. He was about people in the parts unknown. And what American City is 90 percent parts unknown? Detroit, most certainly.

I drove him to a friend, Rochelle Jones, who had a pop-up barbecue and soul food restaurant on the front lawn of her home on the rotting east side near Charlevoix. Only two houses on her block were occupied. I believe the word Tony used to describe her collard greens was "luxurious."

When Anthony Bourdain says something like that about your cooking, luxurious, you're destined to leave the lawn for a storefront at the very least, maybe even a food truck. A customer had pulled up with a cooler full of beer on ice in the trunk. He had tall boys of Guinness. It was perfect.

It's all gone now. Rochelle works full time as a custodian on the behavioral ward at a health center on Conner, put out of the food business last year by repeated basement floodings brought on by poor city infrastructure. She tried to get help from the city, but the city has no money left over from its downtown spending spree to fix pipes on a east side street with two families.

"They're not coming, I know," she told me. "But that's life out here and anywhere else, I suppose You just gotta maintain. I'll be back. I know I will." 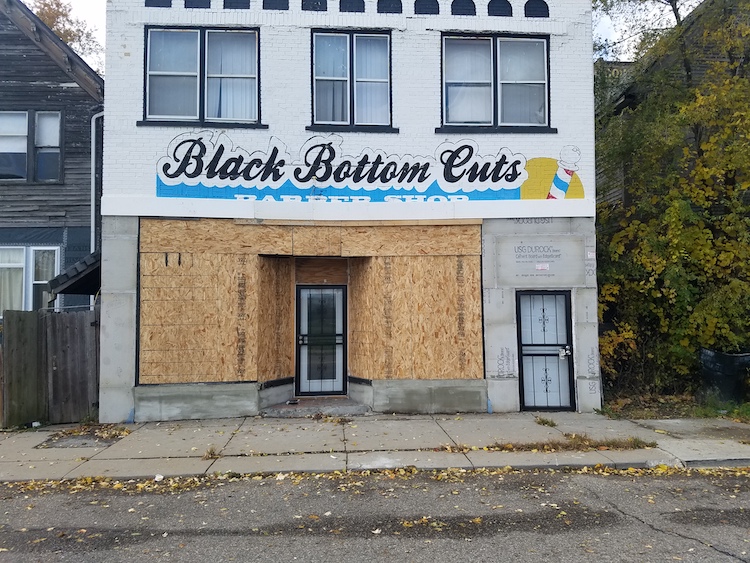 We stopped and had a thimble of good cognac with the barber.

"I'm impressed how Detroiters can make it work," Tony said, lifting his glass in appreciation.

The barber didn't cut it for long. The place is now boarded up and abandoned.

We went on to have a long dinner of oxtails and yams, greens, blueberry cobbler and homemade wine at the Full Belly Cafe at Nevada and Mound, near the 11th Police Precinct. Tony's crew said the best food they had in Detroit, and I agree to this day.

Isabelle Gaddie, the proprietor, thought the people of the neighborhood and the police deserved wholesome, organic cuisine. She never made money.

Isabelle tried to expand over the years, but was outbid for the adjoining side lots by a downtown speculator who never developed.

"I'm a black woman," she said. "I thought City Hall wanted to help people like me. I didn't feel so."

She went looking for a liquor license, thinking that would draw a local crowd. But the price for a license had ballooned from $14,000 to $75,000 in just two years since nearly all of the licenses had been bought up by downtown speculators. Then Isabelle fell ill. Then came seven surgeries. The boards went up and the signage fell down.

"I can't use a broom," she told me by telephone. "But I can still cook. My kids want me to leave Detroit. But I'm home. I'm an antique. I still dream of opening the restaurant back up."

The Engine 23 Firehouse on the Boulevard is still there, although Engine 23 has been permanently mothballed. The men still battle on and the coffee is always warm.

On Robinwood Street, some houses have been demolished, lifting it halfway from hell. The sidewalks are new, but lead to nowhere, an incredible waste of money. Most other houses are boarded and barred and have cameras mounted from the roofs and have peep holes carved in the doors. Cops don't drive by here. 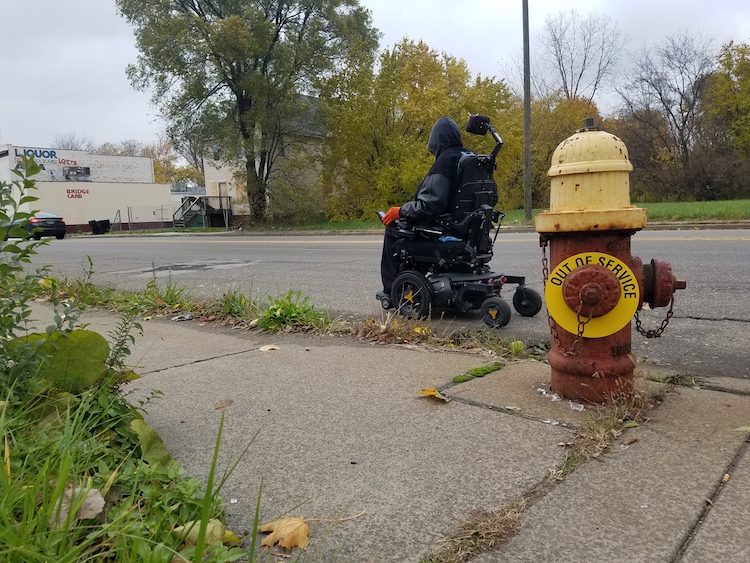 This is that other Detroit few want to acknowledge through the boom of the downtown building dust. The one filled with all the tough sons of bitches who stuck it out, who fought and continue to fight for their families, their homes, their way of life. This is the Detroit Tony Bourdain was attracted to. The authentic. The perpetual. He cared for people in a time when too few do.

Here's to you, Tony. And you, Detroit.