Here's a wacky development in a city with no shortage of weirdness: A Detroit businessman cooperating with federal prosecutors in a city council bribe case now suggests Mayor Mike Duggan may be cheating on his wife of 32 years.

Joe Guillen of the Detroit Free Press breaks the news about Bob Carmack, described as "the star witness in the federal government’s bribery case against Detroit Councilman Gabe Leland," and his mobile video display: 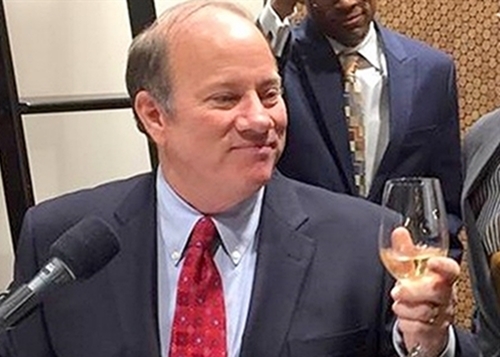 Mike Duggan and his wife are "proud of the marriage we’ve built over 32 years," they say. (Bedrock Detroit photo)

As part of an operation for which Carmack said he paid about $20,000, surveillance video of Duggan was broadcast on two giant video monitors affixed to the back of a truck parked outside city hall Wednesday evening during rush hour. The truck drove around the government office center, exposing the video to city employees and downtown visitors during the busy evening commute.

Onlookers stopped and stared at the video, which appeared to show Duggan’s movements away from the office. Duggan is seen in the video — of which the Free Press has obtained a version — driving a Ford Taurus and entering and exiting the car at various locations. In an interview outside City Hall on Wednesday night, Carmack explained that he had hired private investigators to follow Duggan and record him after hours.

The edited video displayed on the giant screens showed Duggan driving to what appeared to be a suburban location and pulling into a garage. On three occasions, according to the annotated production, the video shows a woman arriving at the same location between one and four hours earlier in the day. Duggan arrives at the location without his personal protection unit in view, staying on three different occasions for between one and two hours, according to the [15-minute] video obtained by the Free Press.

The implication, as you no doubt get, is that the 60-year-old mayor is partying in some manner. 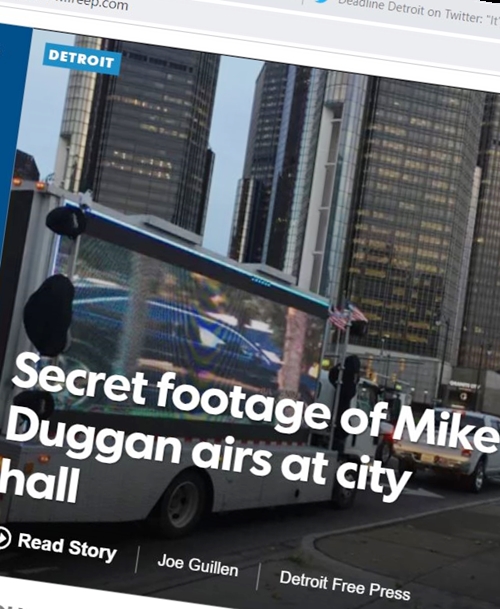 The Freep, which says the woman "has served on at least one mayoral advisory group after Duggan was elected," notes that it "has not independently verified the accusation." It adds that Carmack "is embroiled in a handful of lawsuits involving the city."

♦ LeDuff column: Midnight Mike Caught On Tape! Where Do You Sleep, Mr. Mayor?

Guillen quotes a Thursday handout by Duggan and his wife, Lori Maher. They accuse Carmack of trying to "create a negative judgment on the state of our marriage."

A litigant, angry to be losing a case to the Detroit Law Department, apparently decided to retaliate by hiring private investigators to follow the Mayor without his knowledge for several months. And in the end, their surveillance failed to uncover a single misdeed in the management of the city.

If that terrible invasion of privacy weren’t enough, it got worse. This same angry litigant then took individual videos of cars driving, spliced them together, and added assumptions and insinuations, all so he could create a negative judgment on the state of our marriage.

We decided to write this statement together because we are proud of the marriage we’ve built over 32 years, proud that our bond today remains strong, and proud of our goal to spend the rest of our lives together.

When you elect a public official you have every right to pass judgment on their performance in office. But you don’t get the right to pry into their personal lives or demand information on their marriage. At least that’s how we feel and why we don’t  answer questions about ours.