Betzold: The Battle in Detroit's Jefferson-Chalmers Neighborhood Over Gentrification

The author, a Deadline Detroit contributor, is a freelance writer and a former Detroit Free Press reporter.

When the fence around the Guyton school at 355 Philip Street came down this past summer, some Jefferson-Chalmers residents were alarmed that gentrification was already underway.

With the city actively considering redevelopment plans, they wanted their voices to be heard. So at the end of October, a bus full of neighborhood activists showed up at Detroit City Council, wearing shirts emblazoned with the message:  “Development Not Displacement.” Dozens made public comments. 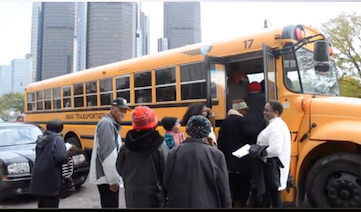 Members of the group, which calls itself Jefferson Chalmers Community Advocates (JCCA), say the city has been insufficiently responsive to basic community needs with consultants and professionals pushing proposals they don’t want. “They’re trying to drive you out,” said one resident at a recent JCCA meeting. But city planners say they’re doing all they can to reach out to residents to gather their views about priorities.

Guyton, which closed in 2016 due to declining enrollment, is ground zero for this debate over the future of one of Detroit’s most important gateway neighborhoods, on the border with the Grosse Pointes. Its proximity to downtown, generally solid housing stock and prime location on the Detroit River make it a logical choice for home buyers priced out of overheated real-estate markets closer to the center of town.

Preliminary city plans state rather vaguely that Guyton has “potential for many to all units to be affordable at 50 percent AMI (area median income)." Residents fear there are also plans to put infill housing (development of new housing in established neighborhoods) on the large school playground.

New market-rate housing would potentially drive up property taxes and rents, posing a threat to senior citizens and families who have stayed through the hard times, maintaining their homes and forming block clubs to battle blight.

Deputy city planner Allen Penniman, the point man for the project, says the fears are unfounded -- no developer is yet on board, he insists, adding: “Some residents have emotional ties to the building because they went there as kids. They have a hard time seeing it as anything other than a school.”

Wayne State urban law professor John Mogk, the original chair of the neighborhood’s citizens district council, says the city may indeed be seeking to unload the school property to a developer. “But from a planning perspective, why would you use the playground to build something when there are other places for infill housing” on partially demolished blocks? “Where do the young people in the neighborhood play then? In the alley along Jefferson? In the streets?” 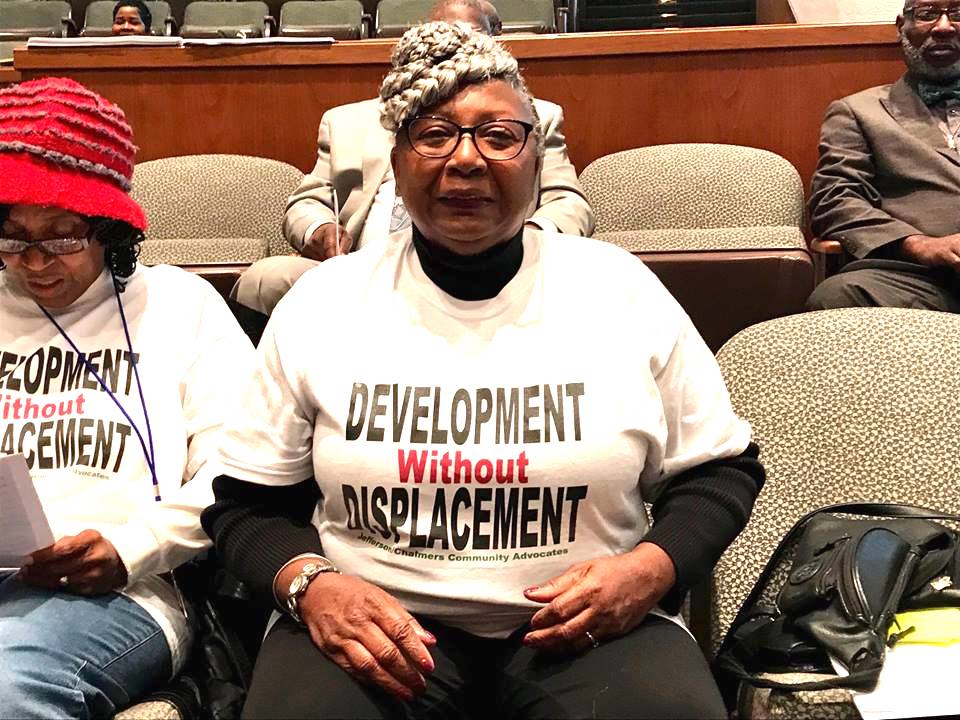 At stake is who defines what will happen in the neighborhood. Over recent months, the city has put out two different surveys and held three community meetings, which residents say were poorly advertised. Activists call the process flawed and often patronizing.

“We’ve been here through it all, and we’re the ones who know best what our neighborhood needs,” says Jocelyn Harris, co-leader of JCCA and a former president of the citizens’ district council. Her group collected more than 300 signatures on a petition that called for “a more equitable and inclusive planning and economic development process that prioritizes the voice and recommendations of our residents.”

When the group met with chief city planner Maurice Cox after they went to City Council, Cox questioned whether they really had the numbers to prove they represented the views of residents.

In comparing the 12 priorities noted on the JCCA petition with 14 “initial recommendations” unveiled by the city at an Oct. 8 community meeting, there is little overlap and clearly divergent perspectives.

The activists want a community center and separate elementary and middle schools (two old rec centers are both closed and there is one combined elementary and middle school). Penniman says the planning department can’t promise a rec center or school because those are the purview of other city departments. The activists want home repair grants for low-income residents, a property tax freeze, an enterprise zone and workforce development office, and the removal of bike lanes along Jefferson, which they complain were put in without any consultation with the neighborhood.

The city’s “initial recommendations” include none of those things, while touting “forest patches” and “solar pilot projects” on vacant lots and a canal walk along Alter Road -- projects not even on JCCA’s radar. The document also mentions “establishing a conservation overly district,” an ugly typo for an “overlay district,” itself an obscure planning concept.

One aspect of the city’s plan -- opening up “frenced off” [sic] pedestrian entrances to A.B. Ford Park along the river, has already been scuttled (or at least delayed) after a homeowner complained it was exactly what nearby residents did not want to see, as it would make it too easy for troublemakers to gather in the park.

JCCA has held eight meetings since April 2017, with the latest attracting nearly 50 people. The city has recently put many of the activists on its official “Residents in Action” committee, giving them a seat at the table. But many are still disgruntled and suspicious.

Penniman insists “we strive to get as representative a sample of community sentiment as possible given the resources at our disposal.” He says the city’s preliminary plan for the neighborhood, based on tabulations of responses to its initial recommendations, will be presented at the city’s fourth community meeting, slated for late January.

But the two sets of proposals contain little common ground, and no clear path to agreement is apparent.