Our New Governor: 'Michigan's Problems Are Not Partisan Problems'

New leaders are sworn in to serve Michigan through 2022, and maybe through 2026 if they impress enough voters. 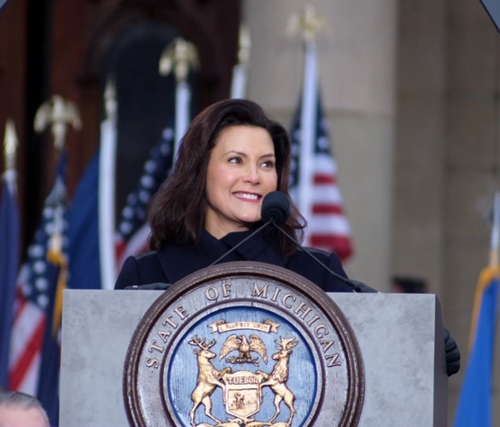 The text of Granholm's inaugural address isn't on the state website, which still showed Snyder as governor more than an hour after her swearing-in. The updated page is now online.

These excerpts from her "Building Bridges Together" speech are from coverage and live tweets by Beth LeBlanc of The Detroit News:

"It is an incredible honor to address you as the 49th governor of the great state of Michigan. . . .

"“We may belong to different parties, but we are all here today for the same reason. We are proud Michiganders, first and foremost."

"We might live in divisive times, but Michigan’s problems are not partisan problems. Potholes are not political. . . None of us can afford to compromise Michigan's economic future because we won't compromise with each other. . . I will be a governor for everyone.

"At a time when people are interested in building walls, we here in Michigan are going to get back to building bridges together. . . . Let's get to work, Michigan."

Whitmer and Gilchrist are guests of honor Tuesday night at "an evening of music, food and fun in Detroit" -- a three-hour inaugural gala in Cobo Center for $150 ticket holders. The dress code is black-tie optional.