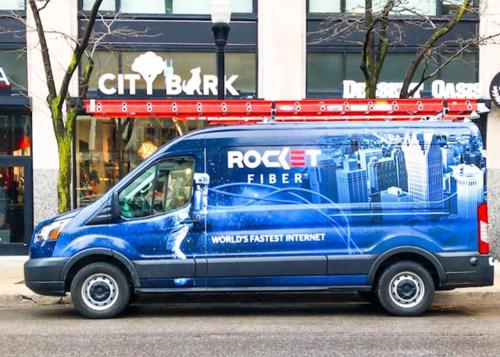 Dan Gilbert’s Rocket Fiber once appeared to have aggressive plans to capture the Internet and cable market. But it has quietly abandoned an effort to enter the television cable space as more people cut the cord in favor of digital streaming services.

The pivot comes after the fiber optic internet provider told Crain’s in early September 2017 that it was months away from introducing a "fully featured cable TV product."  On Thursday, an associate with the company told Deadline Detroit that Rocket Fiber had “put a pin in that project, because most of our clients are using Netflix and Hulu for television.”

Indeed, a media release last March says Rocket Fiber “decided not to continue developing a traditional TV offering over our network.” The release goes on to encourage would-be customers to use Rocket’s gigabit-speed service to meet their television needs, saying streaming shows and movies can come at “substantially lower costs than a typical cable subscription — with its multiple fees for service and equipment.” The release adds that a digital antenna and receiver can get viewers up to 20 local TV stations for free.

Rocket’s plan to offer cable TV in addition to high-speed Internet was seen as a means to lure more Comcast customers to its faster, though in some cases, more expensive Internet service. Rocket Fiber does not offer less costly, lower speeds. The two Internet providers have increasingly jockeyed for market share in Detroit in recent years, as Rocket lays fiber optic cable further from the city’s downtown core and services more high-rise residential and commercial buildings.

But unlike Comcast and even AT&T, the company does not offer bundle packages, and its more expensive Internet-only service has limited appeal in a city like Detroit. At last check, Rocket charged $70 a month for one gigabit for residential service. CEO Marc Hudson told Crain’s in 2017 that the company’s “mission” was to expand to “all of Detroit.”

To that, Crain’s pointed out the challenges, writing:

Fiber optic cable is expensive and many of Detroit's neighborhoods are sparsely populated, giving Comcast and AT&T an advantage to deliver internet and TV over existing cable and phone lines, respectively.

The business publication also noted that it cost $30 million for Rocket Fiber to lay 5.5 miles of fiber-optic cable network in the central business district in 2015.

An official from Rocket Fiber did not return phone calls for comment.