Update: West Bloomfield Teen on ABC's Shark Tank: 'We Got A Deal!' 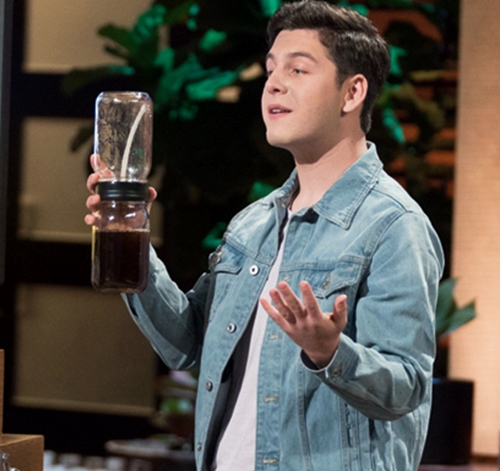 On Sunday night's taped show, he got offers from three of the five sharks, but decided to go with Cuban's offer of $50,000 for 30 percent of the company. Feber initially asked for $50,000 for 25 percent.

Feber, a 19-year-old sophomore at Babson College in Boston, said he wants to use the investment to reduce the cost of the product, which currently sells for $15 to $20. Cuban thought it was better to use the money to market the product and make a bigger profit with the current pricing.

The product is essentially a straw and screen that attaches to Mason jars to make the cold-brew coffee.

Feber said on the show that he is 18. But the show is taped, and the Jewish News reported that he is now 19.

After O'Leary's offer, Feber said: "You mind if I hear the rest of the room?"

Cuban, who refered to him as "mini-me," made the offer, adding: "And I want to know now."

Cuban went up to Feber and said "Mazel Tov."

"This is the coolest thing ever," Feber said afterward.

After the show aired Sunday night, Feber posted on Facebook:

WE GOT A DEAL!

I'm so proud and humbled by the amount of people that came out of the woodworks to support me this week.

I've gotten so much love.

Mark Cuban, let's do this.

Max Feber, 19, of West Bloomfield gets national exposure Sunday at 9 p.m. when he appears on ABC's Shark Tank to pitch a patented product.

Feber pitches BRUW, a cold-brew coffee filter system he invented at 15 when he was in a dual-enrollment class through Frankel Jewish Academy in West Bloomfield and Lawrence Technological University in Southfield, reports Keri Guten Cohen of the Detroit Jewish News:

An admitted coffeeholic, Feber had seen some YouTube videos on people brewing cold coffee using mason jars. He began tinkering with jars and makeshift filters of cheesecloth and paper towels and ended up with a “huge mess.” That’s when he went to the garage and got some wire screen to test.

When the screen led to success with the prototype, he launched a Kickstarter campaign in the fall of 2015. He raised more than $10,000 from 180 backers and went into the manufacturing and distribution phase.

In March of 2017, he appeared on Hatched, a syndicated television show featured locally on WMYD.

Feber, now a sophomore at babson College in Boston, posted this on Facebook the other day:

I’m obviously super excited for Shark Tank this weekend, but I haven’t even seen the episode yet!

That means that I’ll be seeing it for the first time on Sunday night.

I’ll be live posting my reactions throughout the episode on a Facebook messenger thread with some behind the scenes info of what it was like in the tank!