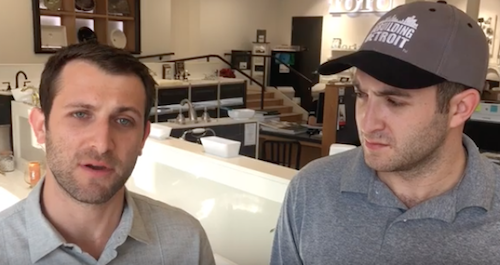 Walking down Cass Avenue in Detroit's Cass Corridor, aka Midtown, you can't help but notice the slick, 5,000-square foot decorative plumbling showroom that opened in September. The grandness of it all is something you'd expect to see in a tony suburb. In Detroit, it's just another sign of the times as upscale restaurants and condos surface in Midtown, downtown and Corktown.

The showroom is part of Advance Plumbing, a supply house which started in the city on Grand River near the Lodge Freeway nearly a century ago. The original owner, Harry Chernick, passed away in the 1960s, and his son-in-law, Ron Moss, took over. In 2012, Moss passed away, and his son Jeffrey Moss, 55, and two grandsons, Justin, 26,  and Joshua, 28, took the reigns.

Thanks to a $100,000 Motor City Match grant, the family moved the plumbing supply store from Grand River to 3740 Cass Ave.in 2016. Last September, they opened the adjoining showroom, which Joshua Moss says he hopes becomes a "destination showroom for the Midwest." They also have a Walled Lake location.

The company has taken advantage of the building boom in Detroit. The owners say they've  supplied the toilets and sinks at the Little Caesars Arena and plumbing fixtures and supplies for many of the new residential units that have cropped up in Midtown and downtown.

We talked with the Moss brothers the other day.