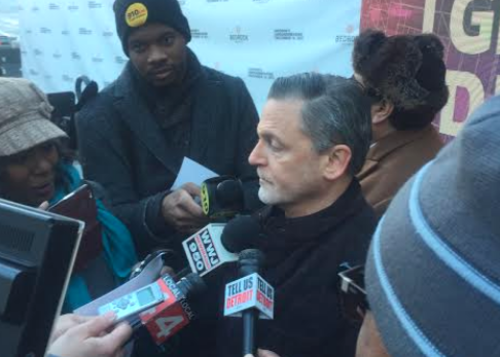 "My recommended :60 second video training for @freep reporter Jennifer Dixon (@jennbdixon) and all higher-ups at the struggling local media outlet," Gilbert wrote, including a link to a Denzel Washington interview, in which the actor said: "If you don't read the newspaper, you're uninformed. If you do read it, you are misinformed."

He also tweeted a separate statement, signed by Bedrock CEO Bill Emerson, describing the piece as a "perplexing and disappointing article . . . that paints a false narrative with numerous twisted facts, wrong assumptions and general inaccuracies."

The well-researched exposé described Bedrock's efforts to avoid accountability for possible safety risks at the downtown buildings it redevelops, specifically the Stott, where it was cited in 2016 for failing to properly secure the building.

Neither Emerson nor Gilbert elaborated on what in the story may have been inaccurate. Emerson's statement simply went on to rehash three facts already included in the article. Executives with the company declined to be interviewed before the report was published.

Gilbert's Trump-like cry of "fake news" is just the latest in a series of combative — and at times altogether unhinged — responses to the negative press he receives. Here are five other instances where Gilbert attempted to discredit, insult or censor reporters:

In July of 2015, Gilbert took issue with a Detroit News report that found his Quicken Loans had the fifth-highest number of mortgages that ended in foreclosure in Detroit over the preceding 10 years, calling it "shoddy, lazy journalism." He included an annotated version of the story that quibbled with dozens of facts and quotes.

In a Metro Times story on Gilbert's response, Detroit News managing editor Gary Miles said Gilbert “didn’t so much challenge the facts of our reporting on foreclosures and blight in Detroit as he did attempt to assail the character and reputation of two of the most trusted and decorated journalists in Detroit, and the credibility of The News.”

Cameras in the wrong spots

Gilbert made headlines in April of 2015 for calling a report that Bedrock was putting security cameras on other people's buildings "libelous." The report from Motor City Muckraker editor Steve Neavling included a photo of a surveillance camera on a downtown building owned by Grace Keros, who said she had not authorized Bedrock to outfit it with a camera.

. @vincethepolack @MCmuckraker "What is this?" Another libelous article. But you are used to that kind of thing, aren't you Vinnie?

In a separate tweet, Gilbert called Neavling "dirty scum," and later added: "Just once in awhile you have to let the lying venom filled wannabes know that they will be held accountable."

That same day, in response to Lansing State Journal reporter Eric Lacy's comment over a separate story on a Justice Department investigation into Quicken, Gilbert made fun of him for tweeting out articles on Bruce Jenner becoming a woman.

. @EricLacy This coming from a "tough guy" who spends half his weekend tweeting about Bruce Jenner. Keep smirking, Lacy...

In 2014, Gilbert reportedly got Yahoo News to remove a post on an NBA blog in which the writer made a joke about how the Cavs owner is also known for founding a predatory lender. Deadspin reported that Gilbert and his chief legal counsel called Yahoo CEO Marissa Mayer directly to complain. The statement in question reportedly read something like "Predatory Lender Quicken Loans Arena."

In October 2017, Gilbert took aim at Metro Times for questioning why his company's Amazon HQ2 pitch video made it look as if there were windmills just off downtown Detroit. "Slandering an honest artist for using a long lens to capture far away objects is a new low, even for the sly rags that spew venom daily," Gilbert wrote on Twitter. The videographer told Metro Times the lens he used was able to compress some 50 miles of distance between the city's skyline and Chatam-Kent, Canada, where the windmills are actually located.

1/2 Slandering an honest artist for using a long lens to capture far away objects is a new low, even for the sly rags that spew venom daily https://t.co/AWnoTRB2lu