L. Brooks Patterson Likely to Announce His Plans at State of County Address 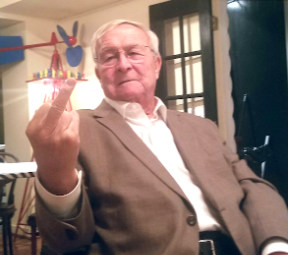 Oakland County Executive L. Brooks Patterson seems to like the attention and the political drama though it appears pretty clear what he plans to do.

Patterson, who just turned 80, tells Mark Cavitt of the Daily Tribune, though "he's still on the fence" as to whether he'll run again in 2020, he's likely to announce at the State of the County Address on Feb. 7 in downtown Pontiac that this will be his last term. Patterson still likes being a little coy.

"I would probably use the State of the County in 2020 to declare that this is my last year (as county executive)," said Patterson. "That would be 47 years in county government."

"I will fill it (this current term) out by the way."

Disclosing that this is his last term would hardly come as a surprise.

In May, Charlie LeDuff wrote in column in Deadline Detroit:

Lewis Brooks Patterson says he will retire on Dec. 31, 2020. He will take his belongings, his 40l(k) and wheel himself home to his suburban condominium where he will watch his grandchildren play from his deck.