LeDuff: A Greek Tragedy -- The Multiple Lives and Deaths of a Coney King 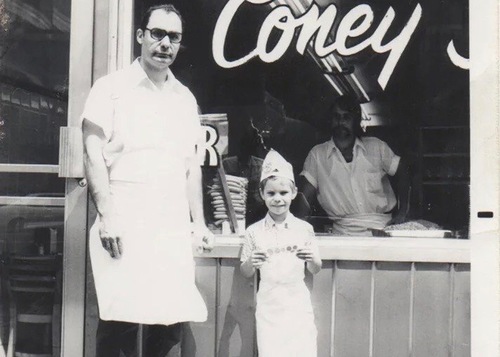 George Keros -- one of them, anyway --with son Bill.

To make matters worse, the reports of his multiple deaths bubbled among family and friends of the other George Keros coney kings, who are related, share a name and also reside in the Detroit area, thus sowing confusion and despair all around as they fielded condolence calls for a man who was not their father.

The first death of George Keros, former proprietor of Lafayette Coney Island, occurred two weeks ago at his home in Illinois. He was 87.

The second death of Lafayette George, came a week later, when his passing was reported online by a local paper as “breaking news.” The story was riddled with inaccuracies, which were quickly copied and disseminated by other news outlets. That's when calls started pouring in to the other George Keros families.

The third death came the following morning, when a corrected story was published in the paper's print edition, which was gratifying to the other Keros Coney families, who had been barraged with texts and voicemails. Yes, all was good, except for the fact that the photograph was not that of Lafayette George, but rather of his cousin, also named George Keros, himself the one-time prince of American Coney Island, located next door to Lafayette Coney Island at the corner of Michigan Avenue and Lafayette Boulevard in downtown Detroit. 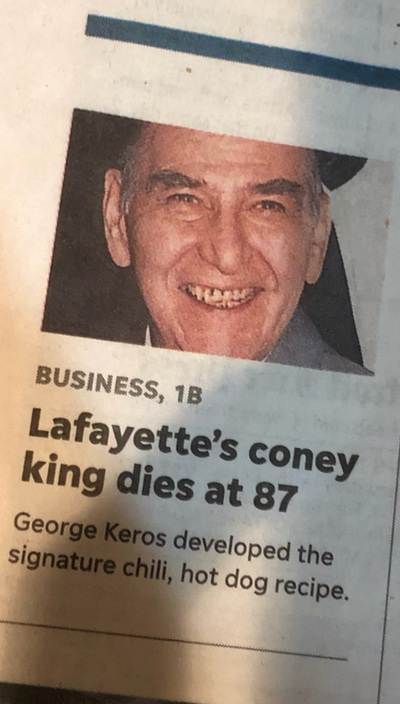 George Keros, but not the one who died recently. This George passed in 2002.

The two Georges were related, and grew up together. But they were in fact not the same person.

George of American Coney Island passed away in 2002. And now here he was, passing away again! Making him our fourth George Keros of the week.

Imagine the confusion of poor Chuck Keros, 83, the retired King of American Coney Island, when the morning paper arrived on his porch. Looking up at him was a picture of his brother next to the story of his cousin. It must be said that Chuck is living the latter years of old age and struggling with the difficulties that come with it. Looking down at the news pages, his first feelings were those of disorientation, something like an old sailor on rough, strange seas.

And then the tears flowed.

And then King Chuck gathered himself, wiped his eyes, poured a regal cocktail, laughed hysterically and canceled his subscription.

The story of the Keros family deserves to be properly memorialized. It stretches from the mountains of Greece to the boulevards of America. They are a clan who has prospered and multiplied, changed what and how we eat and all the while became a cultural touchstone of the Motor City.

It begins in the impoverished village of Dara, when 16-year-old Constantinos (Gust) Kyriakopoulos is sent down the mountain by his father – yes, also named George -- to the docks of Patra to make his way in America. Gust buys a ticket, boards the Fransizka and lands at Ellis Island in November 1906.

The owner of a single pair of shoes and unable to get much going, young Gust heads to Detroit. But not before the teenager sets his dark eyes upon the electric lights of Coney Island, Brooklyn. He becomes intoxicated by its sounds and smells, its Loop the Loop coaster, Tilyou's Ferris Wheel and Charles Feltman's Coney Island hot dog emporium.

Gust shines shoes, pushes popcorn on Belle Isle and sweeps shops. He sends for his younger brother Vasilios (Billy) Keros, who makes his way down the mountain in 1910, boards the SS Themostocles and finds his way to his brother in the boomtown of Detroit.

Gust and Billy try their hand in the automobile and pickling plants, but settle on hat repair and shoe shining at a small storefront at 115 Michigan Avenue near Lafayette Boulevard. They install a grill in the corner where they roast hot dogs for sale. 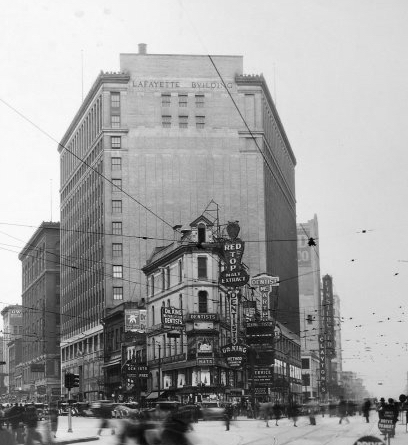 You may recognize this corner. You can get hot dogs there -- in two places. (Courtesy photo)

The hot dogs catch on after Gust adds a homemade meat sauce – a proprietary recipe still used today. Remembering his time in Brooklyn, Gust christens his creation Coney Islands in 1917, the same year alcohol is outlawed in Michigan.

Business is good at the new American Coney Island, helped along by the speakeasy and gambling tables in the basement. So good in fact that Billy opens his own joint directly next door, in 1929, calling it Lafayette Coney Island.

It is an amicable relationship, the brothers prosper and have children. Gust, the American Coney King begets George and Chuck and Joe and Ray.

That makes two Georges and two Coney Islands on the same block along with the Arcade Bar, also owned by Gust.

Eventually, Lafayette George assumes the crown from his father Billy.

Meanwhile, Gust's oldest son, George, lands in France during the Normandy invasion with the American armed forces, then falls in love with a Parisian woman. He lives there for a few years, appears in a few French b-films, falls out of love with the Parisian woman, returns to Detroit, only to find his brother has inherited the store. As a consolation, George is given the corner bar.

Meanwhile, Chuck sends for his cousin back in Greece. His name, too, is George, and with Chuck's help, Cousin George from Greece opens his own Coney Island in the suburbs of Detroit. But he is another George for another time. 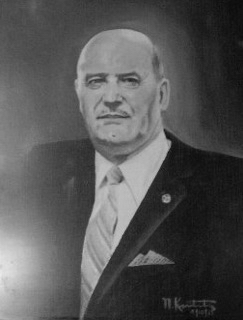 Lafayette George eventually sells his diner to his employees, who are neither Keroses nor Georges, but rather Ali and Avdija.

Lafayette George Keros is survived by his sons Bill and Steven; his daughters Leslie, Sandra and Madeline, and five grandchildren.

Much has been made of a family feud between American and Lafayette Coney Islands, but it has been wildly overstated, says Bill Keros, the son of Lafayette George.

“I used to be sent out on the street to steal customers from American,” he recalls. “Believe me, it wasn't hard, but we're family. We've always loved each other.”

To which his cousin Grace Keros, the current Queen of American Coney Island and daughter of Chuck, responds: “Yeah we love each other, but they were still stealing customers. How nice was that, after all we did for them?”