An Ode to WWJ's Vickie Thomas, on her induction into Michigan Journalism Hall of Fame 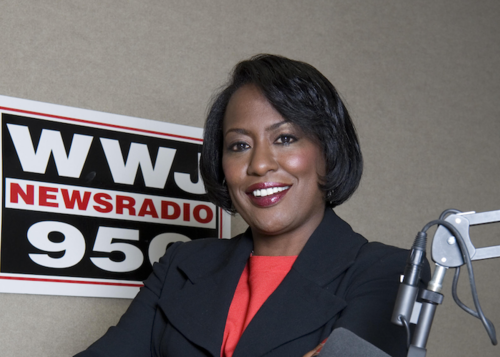 Vickie Thomas: "There's certain things you see in life that you can never get out of your mind."

It’s Monday after lunchtime, and WWJ Newsradio 950’s Vickie Thomas has been running around metro Detroit since about dawn, filing self-produced reports or going live on air every 30 minutes. An MDOT van was hit by a suspected drunk driver overnight, Wayne County Executive Warren Evans is reviving the regional transit debate, and Detroit's leaders are asking for input on the 2019 budget. Three subjects, eight one-minute stories, and she's still got a Black History Month feature to file before she puts down her recorder for the day.

Thomas is accustomed to the frenzied pace of headline news reporting, but today brings something new: Just named a Michigan Journalism Hall of Fame inductee, she’s now something of a newsmaker herself.

While the latest crop of inductees includes local legends like retired WXYZ reporter Mary Conway and recently deceased Free Press restaurant critic Sylvia Rector, it felt right to take a closer look at Thomas' career for several reasons: 1) As her former colleague, I can say with some certainty that she is one of the coolest people in Detroit media; 2) short-form newsradio has often felt like the unappreciated stepchild of the news business, though it is in fact the hardest grind; 3) almost everyone loves her, even Kwame Kilpatrick; and 4) she will be just the fifth black woman inducted into the Michigan Journalism Hall of Fame, joining a list that includes about 100 white guys.

From the WWJ-950AM news cruiser, her shuttle between story scenes, Thomas manages to squeeze in time to reflect on the honor and her “long ride” covering news in her hometown of Detroit.

“I feel old as dirt now,” she says with a hearty chuckle.

Thomas' career began at WDET in 1988, while she was still enrolled at Wayne State University. Though she laughs about having “made all of my mistakes right here in Detroit,” in reality, she exuded confidence from almost the very beginning. Anyone who’s encountered Thomas in the field knows she’s front and center at just about any reporter scrum or news conference, driving the conversation — so much so that it sometimes feels as if she’s corralled the news makers around her. And apparently that’s how she was in 1991, when her willingness to jump in without waiting for others to ask questions caught the attention of WWJ’s news director, landing her a job at the station where she’s spent almost all of her career.

Staring at a robber's gun

Today Thomas is WWJ’s city beat reporter, covering government and other community issues in Detroit — a role she’s uniquely suited for, having lived nearly all her life between the city and Highland Park.

“Going through some of the things Detroiters have to experience on a day-to-day basis makes you better able to relate when you're out covering stories,” she says, going on to recount the “traumatizing” experience of once being held at gunpoint during a robbery at a drugstore. The image of the gunman pouring sweat and snarling through jagged teeth is seared in her memory.

Thomas has cultivated her beat by having her ear to the ground and being impartial in her reporting. She regularly gets scoops, and exclusive interviews, like when Detroit Mayor Mike Duggan was elected county prosecutor in 2001, and when former Detroit Mayor Kwame Kilpatrick was awaiting trial in Texas. In 2011, he sent her a signed copy of his book with the message, “Thanks for always being fair.”

Thomas' greatest hits are a reminder of the glory days of local radio — and moreover, local news — when outlets had the resources to send reporters to cover stories around the country and even abroad. In the ‘90s and early 2000s, she covered two presidents’ funerals and one’s inauguration, flew to Panama in a C130 with the 191st Battalion out of Selfridge International Guard Base, and went from office to office on Capitol Hill asking lawmakers from metro Detroit how they were working for the people at home. Thomas paired that last piece with Janet Jackson’s “What Have You Done for Me Lately,” and the sound of her high heels clicking along the congressional office buildings’ marble floors.

The most memorable story she says she covered in Detroit was Nelson Mandela’s speech at Tiger Stadium in 1990. She recalls the South African anti-apartheid leader as humble and remarkably unresentful, despite having served 27 years in prison.

“Just being able to witness that history was incredible,” she said. “There's certain things you see in life that you can never get out of your mind.” 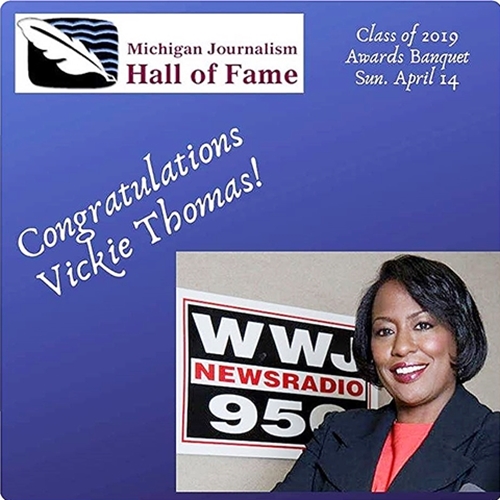 Of course, local commercial radio has declined since. WWJ, though still one of the most listened-to stations in metro Detroit, has suffered cutbacks and periods of uncertainty. For years there were fears its longtime parent, CBS, would eliminate its radio division. It wound up being spun off and merged with Entercom Communications in 2017.

'Still love what I do'

“It's been kind of hard to watch,” Thomas says. “You have to wonder if people really put profits over serving the listening public and readership . . . when you don't put the resources where they could possibly benefit you better.”

“But from my vantage point, I still love what I do and you just have to have that fortitude to keep pushing in the face of everything that's going on around you.”

As Region 2 director of the National Association of Black Journalists, she also wages battle on another front. For years, Thomas has been at the center of a push to make newsrooms more diverse.

For better or worse, Michigan journalism is Detroit journalism — apologies to Lansing and Grand Rapids, but much of the news that comes out of this state occurs in this area. And Detroit is an African-American city. That the newsrooms telling its story are still overwhelmingly white seems very wrong.

And that may be the message Thomas takes to Michigan State in April, when she formally enters its Journalism Hall of Fame.

“I would definitely like to see more African-Americans inducted, in [the Detroit] market especially.”