If you promise to build it, they will come: Inside the Build the Wall Town Hall 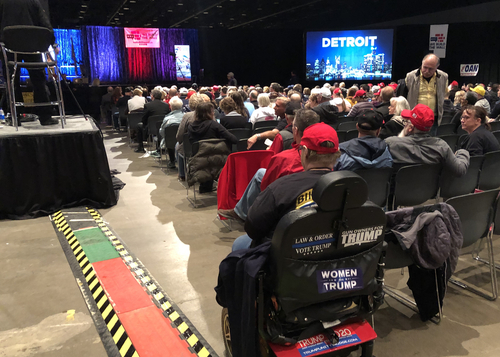 Your grandma was at the We Build the Wall Town Hall at Cobo Center Thursday night. She was the one in the stars-and-stripes jacket and matching hat, with the snowy-white sneakers, right?

Your uncle was there, too -- in his “Keep on Trumpin’” T-shirt. And your other uncle, or maybe it was your brother, in the Git R Done shirt. He didn’t look so hot. When you hold a pro-Trump event in Detroit, downtown Detroit, on a Thursday night, you are only going to bring out the hard core. The Bikers for Trump. The proud Deplorables. Kerry Bentivolio, the reindeer farmer who one-termed it through Congress -- pretty sure he was there, hanging with Trucker Randy and the rest of the superfans in the VIP section. There were canes and walkers, too, because these are not college students. These people are old, and white. 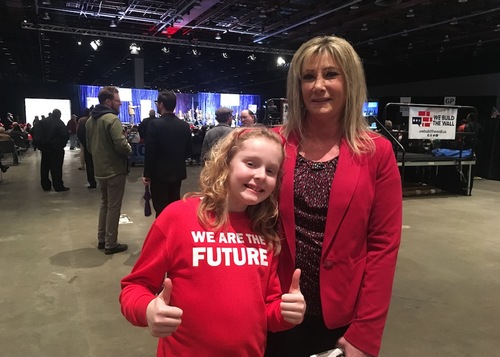 She is the future. (Photo: Violet Ikonomova)

The Build the Wall Town Hall was originally booked at a church in Warren, but the crowd outgrew the space, necessitating the move downtown, where the space outgrew the crowd -- maybe 300 showed up in a hall that could have held five times that many. The usual protesters showed up, shaking signs and chanting the usual stuff. They should have just gotten a free ticket, come inside and listened. Much more interesting.

Here’s the premise of the Build the Wall movement, started by Brian Kolfage, an Iraq war triple amputee who, in December, came up with a very American solution to Congress’ denial of $5 billion for a border wall with Mexico – he’d start a GoFundMe. Just like that, he’d raised $20 million. That’s far short of the $1 billion he wanted, but undaunted, he came up with this road show, and this pitch: Give us some money, and we, Kolfage and some unidentified others, will build it ourselves. Obviously, $20 million won’t go far, but they promise to be (unlike the government they despise) efficient and strategic in where and how they’ll do it.

“Our highly experienced team is highly confident that we can complete significant segments of the wall in less time, and for far less money, than the federal government, while meeting or exceeding all required regulatory, engineering, and environmental specifications,” the GoFundMe page states. They further state they can do it for half the cost of the government estimates.

So they’re going to put up parts of a wall, strategically located on private property with the full support of property owners, and it will serve as a funnel, thereby concentrating deterrent efforts to the gaps. It kinda-sorta makes sense, in a back-of-the-napkin way.

Gregory Smith, of Farmington, plans to donate: “I’m on Social Security. What can I do? $5? But you know, I can do something.” His friend, Gregory Allen, of Berkley: “They said they started with $5 and they raised $2 million off of that $5, so $5 is not a small deal when it comes to something like this.”

Five bucks here, five bucks there, it adds up. Hence the road show.

It was staged as a series of one-on-one chats, with a lineup of mostly Fox News C-listers – Kris Kobach, the former Kansas Secretary of State who tried to prove Trump’s contention that he really won the 2016 popular vote, once you threw out the votes from illegal immigrants, before that effort collapsed. Tom Tancredo, the anti-immigration former Colorado congressman. Some guy from Breitbart. Some “angel families,” the dreadful term given to those who’ve lost loved ones to violence by an "illegal", which was the term of the night -- none of this “undocumented” stuff. David Clarke, the former Milwaukee County sheriff whose very un-Wisconsin wardrobe affectation is a 10-gallon Stetson that seems to grow with every TV appearance. He wears it so low on his brow he resembles a talking hat. Joy Villa, a singer, the other person of color in the crew, who actually muffed a line in the national anthem.

Each came out, faced some friendly questioning, gave their applause lines and gave way to the next. 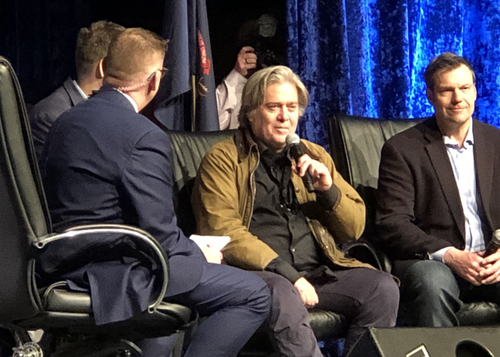 The big star, the A-lister by any estimation, was Steve Bannon, former Trump campaign chairman, former Breitbart president, this glorious mess of untrimmed hair and big ideas. What is he doing in this lineup? Yes, he was fired from the White House and had to grovel his way back into the good graces of the Trump constituency -- he said mean things about the administration to Michael Wolff, whose “Fire and Fury” was the first bombshell of the growing shelf of Trump-presidency books -- but he still seems to be a serious person. He travels the world pushing populist policies with European far-right leaders. His presence lent an otherwise featherweight group some actual gravity.

And he was the only one who seemed to bring some coherent pain. He denounced the “12 traitors” who voted against the president’s national emergency executive order. He asked for a show of hands of precinct representatives, and encouraged the crowd to get involved at the grassroots level. He seemed, unlike most of the others, to understand what politics is about -- a ground war that’s fought and won skirmish by skirmish, not by barking out that enough fentanyl has been smuggled in this country to kill “73 million Americans,” Clarke’s big shocker line, which he delivered twice.

How far are you willing to go?

The pitches for money were fairly understated. A country preacher could teach them a few things about hat-passing. The GoFundMe was mentioned over and over, but truth be told, public radio goes harder on shaking the money tree. They concentrated on drumming up the border drama. And then the Q&A started. The questions were predictable: How can I get my friends and neighbors to understand how urgent this is? How can I take this message to Wayne State, “one of the most liberal campuses in Michigan?” Finally, after a minor scuffle at the microphone, an older woman in red spoke up.

She was, she explained, a refugee from eastern European Communism, and spoke with the First Lady’s accent. She said she didn’t believe the group was serious. The Soviet Union and its satellites didn’t need walls, she said, because they had something much more serious -- a willingness to shoot to kill border jumpers, as well as land mines. Would this wall be so defended?

No, said Kolfage. No mines. No snipers. This would be a “humane” wall. The woman, who later would give her name only as “Jane Smith,” stepped away from the mic, but her work was done. How serious could this group be, you had to wonder. Is a portion of “humane” wall standing somewhere on the border anything at all?