6 Michigan reps voted against honoring Aretha Franklin. They have 2 things in common 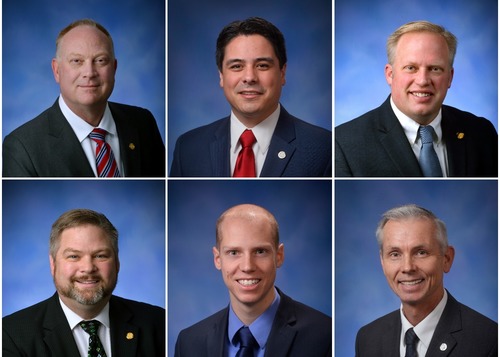 Freeway of love? No thanks, say these Republican men.

Ridin' on the freeway of love? Not these male Republican House reps.

They were the only six lawmakers to vote no yesterday on a bill to rename a portion of the Lodge in honor of Aretha Franklin.

Why? The honor should be limited to first responders and the like, State Rep. Shane Hernandez (top, middle of photo) of Port Huron tells the Free Press.

"People who did a service to our state or nation, we can give them that honor and recognition and we should keep it reserved for them," he said. "I don't deny the great things she accomplished and wonderful things she did. It's just my personal opinion to keep it to first responders and military veterans."

Hernandez said he has no problem with local communities renaming roads for honored citizens, but doesn't believe state highway names should be changed for celebrities.

Of course, Franklin was much more than a celebrity — she was also a philanthropist and advocate for social justice.

And yet, five Republicans joined Hernandez in voting against the bill to rename part of the Lodge in her honor. They are Matt Maddock of White Lake, Steve Johnson of Wayland, Phil Green of Millington, Luke Meerman of Polkin Township and John Reilly of Oakland Township

The bill — put forth, fittingly, by Rep. Leslie Love, a Detroit Democrat — now goes to the Senate. If passed, the stretch of M-10 between Livernois and I-94 will be renamed "Aretha L. Franklin Memorial Highway."