"Optics matter" is overused, but it's born from truth -- just like most clichés.

Whatever we see can be taken as reality, fairly or not -- a lesson Twitter's team in Detroit relearns the hard way by posting a photo of CEO Jack Dorsey with some local staff members at their Woodward Avenue branch office. All eight people shown are white. (The race of two others at bottom right can't be determined.)

We hear you on the lack of diversity. We’re committed to making our company reflect the people we serve, and that includes here in Detroit. We’ve got a lot more work to do. We have a team at NSBE now and we look forward to connecting with the amazing people there.

The reference is to a four-day event at Cobo Center through Saturday -- the 45th annual convention of the National Society of Black Engineers, nearly 16,000 college students studying computer engineering, information technology, electrical engineering and other disciplines.

Twitter recruiters are at Booth 215, staffed partly by members of an employee group known as Blackbirds. They hosted a two-and-a-half-hour food and music mixer Thursday night at State Savings Bank on West Fort Street.

#NSBE45 attendees: Have you checked us out today?
Stop by booth #215 so we can chat!
And be sure to RSVP for #NSBEDowntown to hang with us tonight. https://t.co/yki7uldBsF pic.twitter.com/aGlEBg34ig

Dorsey, the 42-year-old co-founder, is the bearded guy in a black wool cap in the office photo near the top of this article. His Detroit team works mainly on sponsored content sales and other client relations with GM, Ford and Fiat Chrysler ("the automotive vertical," in tweetspeak).

The all-white photo is posted at Twitter Detroit, a three-year-old account that has tweeted just 231 times and has 8,100 followers. These seven people are tagged in the tweet, in addition to Jack: 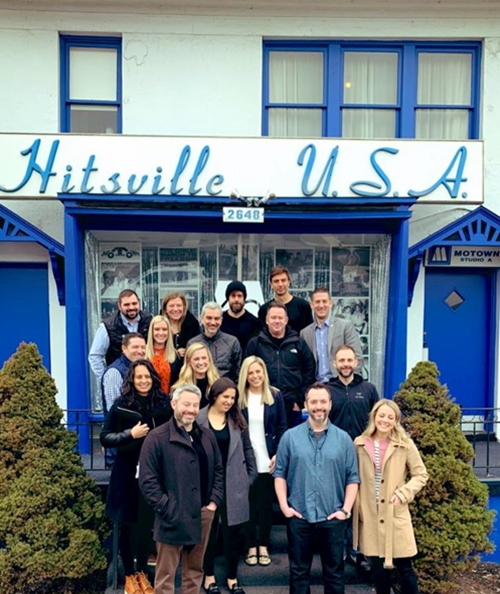 Montano is here because of the Cobo recruiting event, which Dorsey also attended Friday. (In addition, he had a 75-minute #TweetUpDetroit live chat that afternoon with fellow tech CEO Dan Gilbert of Quicken Loans. They spoke about entrepreneurship, technology and Detroit.)

► Updates: "A tech diversity deficit," as Twitter calls it, is a nagging concern among tech employers large and small. "Diversity of voices makes Twitter everything that it is, and we want our company to reflect our service," chief marketing officer Leslie Berland says at the start of a 17-tweet thread two weeks ago.

Blacks made up 4.5% of its full-time U.S. staff as of December, the firm says in a new report, up from 3.4% a year earlier. The company, based in San Francisco, had 3,920 employees last year.

It sets a target of 5% African-Americans on the payroll by this December, "We've got a long way to go, but we've made solid progress towards our goals," the mid-March decocument says.

"We want to do more and move faster," Berland says in her series of tweets, "and we believe increased transparency and accountability are key to doing that. . . .  Instead of publishing an I&D [inclusion and diversity] progress report annually, we will do so quarterly."

Here in Detroit, one response to Friday morning's photo with the boss comes from the City of Detroit's digital and social media director:

I’ve been meeting and working with a lot of national and global companies who’ve never been to Detroit but want to make an impact here and include Detroiters in the process of understanding what that should look like. You can do that too @TwitterDetroit.

A sampling of replies from long threads under both company tweets above:

On a more positive note, a few enterprising job-seekers respond to the Twitter Blackbirds' tweet above by pitching themselves:

If y’all are hiring I have a fire resume to send!