Why Does Someone Hate Steven Singer This Much? And Who the Heck is He? 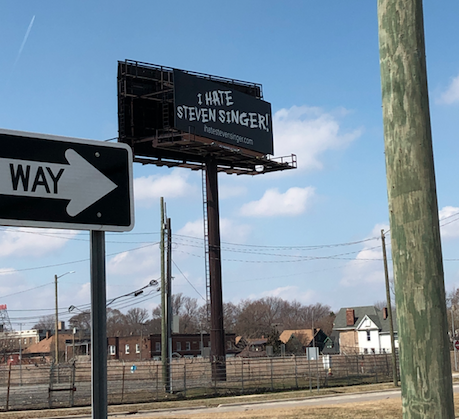 Tool around Metro Detroit and you're bound to find an ominous billboard that says: "I Hate Steven Singer."

So we wondered, who is Steven Singer and who hates him so much that they'd buy billboards?

Turns out that Steven Singer is a Philadelphia jeweler who specializes in diamond wedding rings and gold dipped roses for Valentine's Day and takes orders by phone and the Internet. The billboards are simply a clever advertising campaign.

The company advertises nationally on social media and on radio, including WRIF's Dave & Chuck The Freak, which generated a good response. Outside Philly, they only have billboards in Metro Detroit -- 10 of them, which first surfaced in late January.

"We were looking to grow and Detroit seemed like a good market to us," says Jac Griffin, who handles marketing for the jeweler.

It all started more than twenty years ago when a guy proposed to his girlfriend with a gorgeous diamond engagement ring he bought from Steven Singer Jewelers. Naturally, she said yes. Twenty years later, he buys her another Steven Singer diamond ring to celebrate their 20th Anniversary. She was so excited, she gave her husband an even better present right back (wink, wink).

Exactly nine months later, the couple walks through the door to show Steven their new baby. The wife proclaimed “I love Steven Singer!” The man responded “Here we go again. We’re up all night with feedings and diaper changes. I HATE STEVEN SINGER!” So there you go. The story of why men hate Steven Singer. And why women love him and his beautiful diamonds!

When the billboards first went up in Metro Detroit, Griffin says the store got about three or four dozen calls from people asking about why someone hated Steven Singer.

"Our customers like to joke with us about it," she says.