The most wanted: One beautiful picture means 13 years of hassle for a Detroit photographer

Bobby Alcott moved from Detroit to the New York City area a few years ago, following his wife’s career – he’s a commercial photographer, a good one, and can work anywhere. He grew up here, and has a portfolio crammed with arresting images of Detroit, which he loves. They’re postcard-perfect beauty shots, with the extra something that marks Alcott as an artist, not just another guy with thousands in Nikon glass hanging around his neck. 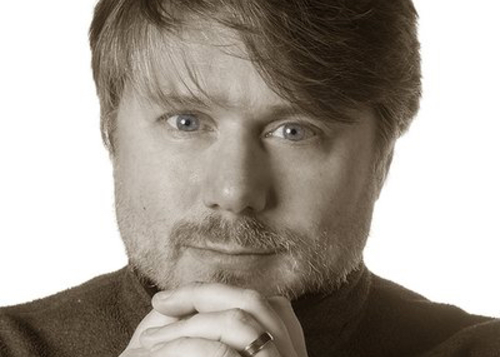 The Renaissance Center is a frequent subject, and one shot in particular – the glittering towers and the rest of the skyline, silhouetted against a cloud-streaked sunset sky – stands out.

Alcott took it in May, 2006. He calls it “Detroit Dans Le Bleu” – Detroit in the blue. He stationed himself across the river in Windsor and waited for his moment. It has a dreamlike quality; the city looks simultaneously grand and mysterious, a vision across the water.

He posted it on Flickr, the photo-sharing site. “All rights reserved by Bobby Alcott,” he marked it.

In the 13 years since the picture landed on the internet, Alcott estimates he’s made “maybe $10,000 to $15,000” selling prints of “Detroit Dans Le Bleu,” or from other, legal usage of the image. Settlements from illegal usage have yielded close to 10 times that much. Crime, in this case, does pay -- pays Alcott, anyway. But it sure has been a pain in the ass along the way.

“I would much rather be doing anything else,” said Alcott from his home in New Jersey. “I would love for this to be out of my life, but it’s hard to stand by when we’re constantly finding companies that should absolutely know better than to steal a picture and use it for a commercial purpose.”

He employs a research assistant who does a weekly search for unauthorized reproduction of the photo. New violators turn up every week. He and his legal representatives have letters in boilerplate now, saying, essentially, You stole my intellectual property; now pay for it.

He doesn’t go after everyone, only those who are using it to make money. Someone who puts it on their blog, or posts it out of ignorance, gets a pass, if only because it’s a pain to send out all those letters for people who aren’t profiting from it.

But Alcott has found his blue skyline on commercial design sites. On book covers. On posters for sale. On other photographers’ sites, which takes a lot of chutzpah, when you think about it. A lot of the worst violators are overseas, and essentially untouchable.

Then there was that day in 2013, when his phone started blowing up with “turn on the TV!” and “congratulations!” messages from friends. He turned on the TV, where the news was being spread: Detroit was getting a bunch of brand-new police cars, thanks to a coalition of business donors. But they wouldn’t look like the old ones. A new design was revealed at the press conference. It featured a gorgeous skyline view of the city, a very familiar one.

It was just a mock-up, but designers, or someone – “people who should know better!” – had helped themselves. Alcott called his lawyer. He collected a settlement, and a new photographer shot something similar from across the river that actually went on the new cars.

No re-tubing this toothpaste

“Detroit Dans Le Bleu” is still on Flickr, although downloading has been disabled. Alcott took it off the market years ago. But nothing really dies on the internet, and so the hunt for copyright violators goes on. Which raises a question: Many people still believe that once an image, a song, a movie, etc. is out there in pixel form, it belongs to the world. People who wouldn’t dare shoplift an album from Third Man Records have no problem with going online, finding it on some in-between site and taking it electronically. Only they don’t think of it that way. It’s downloading, not stealing.

To those people, Alcott asks them to consider something: “Try it yourself. Take something of yours and allow it to be commercially reproduced, where other people are making money off it, and tell me how it feels. When it comes out of your camera, it’s yours, and you should be able to defend that.”

And he has defended it. But there’s no putting toothpaste back in the tube. Monday, on I-94 heading into town, a pickup truck passed me. This one: 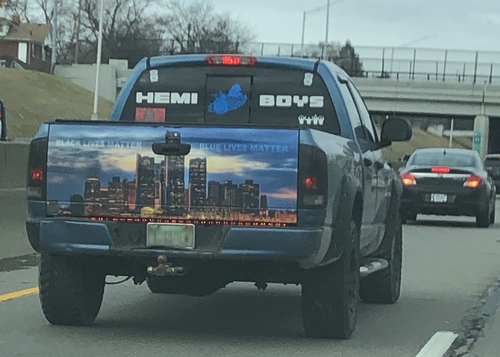 Another violation in a years-long string of them. (Photo: Nancy Derringer)
I sent the picture to Alcott. He sighed. The driver isn’t making money; he’s safe. But the company that put it there? They should pay. Not that they will:
“I’ll never, ever be able to find them.”