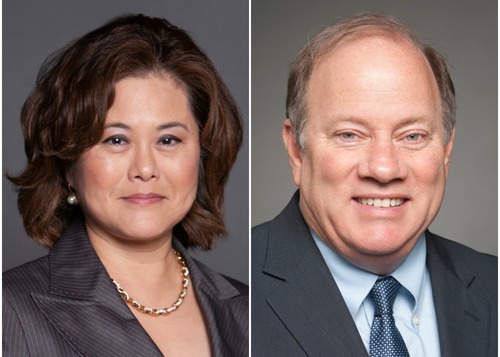 Detroit Inspector General Ellen Ha has spent most of her career working for the city of Detroit, serving mayors from Coleman Young through Mike Duggan. Today her job is to investigate that same city government — specifically her most recent former boss.

Ha on Monday launched an investigation into whether Duggan gave preferential treatment to a prenatal program run by his rumored mistress in a possible conflict.

The probe follows a Free Press report that found Duggan steered more than $350,000 in city funds to the Make Your Date program and ordered city staff to fundraise on its behalf.

But Detroit activists, ex-city employees and politicos say the investigation itself may be conflicted and have called on Ha to disqualify herself.

Before she was named Inspector General by city council last year, Ha was a longtime employee in the city law department. Her final role in the office was as its chief of staff, a promotion awarded by former corporation counsel Butch Hollowell, a Duggan appointee.

“It just doesn’t pass the smell test,” former police commissioner Ricardo Moore told Deadline Detroit. “She’s supposed to be independent but at the same time there’s a certain amount of allegiance to city government, to make sure city government comes out looking good.”

Chris White, a political consultant and activist, also felt Ha’s past service to the city could compromise the investigation.

“Right now a position that should be used as a watchdog is occupied by someone that’s from within the system,” said White, who previously worked for embattled State Rep. Bert Johnson. “Under Ha, it’s not really an independent position as much as it is a promotion.”

Ha’s office did not respond to emails seeking comment. People who know her professionally — including city staffers — vouched for her integrity.

The city’s law department handles legal business for the mayor, city council and various city departments. As chief, Ha was charged with overseeing relations with those “clients.”

She first joined the department in the ‘90s, under Mayor Young, then left and returned as Freedom of Information Act supervisor under Dennis Archer in 2001.

“It’s probably a legitimate concern about whether the investigation can be done in an unbiased manner, but it certainly doesn’t mean that she can’t do an unbiased investigation,” says Tom Ivacko, associate director of the Center for Local, State, and Urban Policy at the University of Michigan's Ford school.

Created in 2012 to hold city government more accountable in the wake of the Kwame Kilpatrick scandal, Detroit's Inspector General serves as a municipal watchdog investigating corruption, waste, abuse and fraud. The position is appointed by council and has a six-year term.

The charter allows the IG, at their own discretion, to tap an outside lawyer to handle a case in the event of a conflict. Ivacko said this and other provisions, like the detailed investigative reports that are made public after a review, are designed to instill public trust in the process.

If Ha were to stay on the investigation, she could manage the possible conflict through additional transparency, like sharing confidential files with the public, he said.

Her office, however, has thus far declined to answer media questions regarding the probe. And it's not clear whether she opened the investigation of her own accord or was prompted by a complaint from the public or another party.

But Detroit’s language surrounding the IG role doesn’t go as far as other cities to safeguard against potential conflicts in the first place. Some cities allow only certified inspectors general to take on the role and have so-called “cooling periods” for ex-city employees. Albuquerque, for example, does not allow IGs to have worked in city government for four years prior to taking the job. Baltimore’s inspector general must be board-certified and win approval from an independent panel.

Regardless of the rules, it’s rare that former city employees take the position. Deadline Detroit reviewed the bios of inspectors general in Chicago, Philadelphia, New Orleans, Baltimore and Albuquerque, and found none previously worked for the cities they’re now tasked with holding accountable. Baltimore has had five inspectors general, none of whom came from city government.

The Association of Inspectors General — which creates standards for the industry — is silent on cooling periods. Its guidebook requires “independence, fairness, objectivity and freedom from real or perceived impairment” and encourages IGs to disqualify themselves from investigations when they have “personal impairments” including “professional … relationships that might appear to lead the [office] to limit the extent of the work, to limit disclosure, or to alter the outcome of the work.”

Despite this, people who know Ha say she has the integrity to set aside personal feelings about her former employer.

“Ellen Ha is a professional and I have no reservations about her ability to do the job as the charter requires,” said her predecessor, former Detroit Inspector General James Heath. “I think anyone who thinks [she] cannot do a thorough job … I think they’re wrong about that.”

And city council members, who appointed her in an 8-0 vote, seem to view her lengthy career in city government as a strength. When Ha was sworn in, Council President Brenda Jones applauded the "many years of legal and municipal experience" she brought to the position.

Duggan was also satisfied with the choice.

"Throughout her career, Ellen has proven herself to be a thoughtful, fair and extremely hardworking lawyer and I'm very happy for her,” he said in the release. “A person of her ethics and integrity is a perfect fit for the position of Inspector General."