LeDuff: Young Black and Strong -- a Detroit Teenager Tries to Find His Way 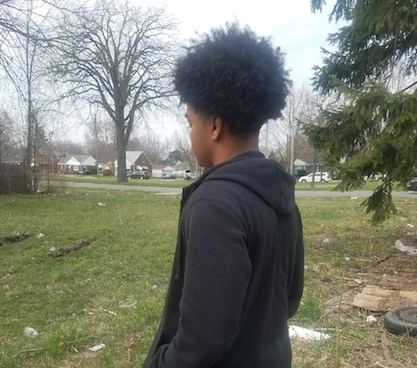 The young man looked people in the eye when he spoke, and the group was captivated by his confidence. That is not an easy thing to pull off in basement church gatherings designed to keep hardened young men off the streets, only to release those same young men back onto the streets once the meeting concluded.

He is a citizen of the inner city: a black teenager speaking of a life of perpetually looking over his shoulder. There are the constant mathematics of survival for people here: do you wait at the corner for the light to change or do you stand in traffic where no one can get the jump on you?

There is the schizophrenia that exists within: fury versus harmony. “You learn to be hard to survive in this reservation they put us in,” he says. “But when you leave this reservation you realize that attitude doesn't work for you.”

I'll call him J. for now, because J. says showing up in news stories and videos can cause more problems at high school than good.

“I don't speak for people, but I can speak about what life is like for a lot of people,” he says as I pick him up from high school in the visitors lot. “But not everybody is gonna understand that. Some people cause drama just for the sake of it.”

J. and I met at the church last winter, spoke a few time since by telephone. And now we were meeting for the second time to discuss me writing the occasional profile of him.

You will learn about him as I do.

By any statistical measure, Detroit is not a wholesome place for a young person. The list is long: education, health, nutrition, violence, poverty. But J. is not a statistic. He is flesh and blood. And something tells me he can make it, despite the odds.

“Are you going to profit from my story,” he wants to know, looking squarely at me as I turn up Gratiot.

“Am I going to profit?” he asks after a moment.

“Spiritually, I hope,” I say to him. “But I won't pay you, that would make you my employee. And that's not what we're doing here.”

J is 16 and a junior at King High School, near downtown Detroit. He stays on the far east side with an older teenage friend who has a car. His mother lives on the west side, struggling to feed the rest of the family.

Sometimes he gets a ride with his housemate to school. On the days when no ride is available, he takes two busses two school, a trip that takes more than an hour, when the busses are running on time.

We follow the bus route in my car. The sagging buildings and littered lots, the shattered glass at the bus stops. The people with mile long stares. The downtown comeback has yet to make its way out here.

'Onto the things of men'

“I've got a lot of goals you know,” he tells me. “I'm taking business and entrepreneur classes. I'm going to start my own company. But I'm not going to college to start. I don't want to take on all that debt.”

He used to roll a little dope when he was younger. But he's out of that game, he said.

We turn into an alley on a dead end street, miles from downtown. His house is located next to a vacant lot strewn with debris and an old tire. Social security helps him make the bills. He's had a heart ailment since early childhood.

He turned his pockets inside out, that hold nothing but lint and stray thread.