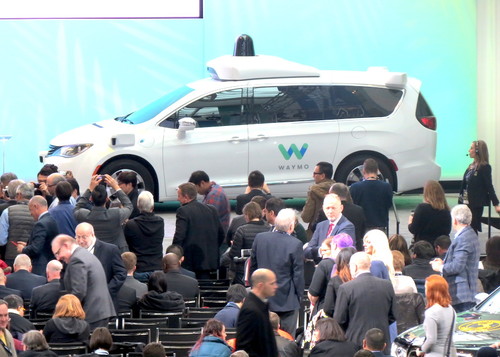 The Michigan factory puts Waymo right across the Detroit River from the source of minivans used by Waymo — Windsor — as well as near many automotive suppliers. The $13.6 million investment could bring up to 400 jobs to an area of southeast Michigan that has in years past lost automotive jobs and still is at risk of losing two General Motors Co. factories, including the nearby Detroit-Hamtramck Assembly Plant.

Waymo, which is seen as a leader in the autonomous-vehicle race, is renting space at an existing facility at Detroit's American Axle & Manufacturing Inc.'s campus near the west boundary of Hamtramck at Interstate 75 and Holbrook Avenue to outfit Chrysler Pacifica minivans and Jaguar i-Pace electric cars with the technology by mid-2019.

...Waymo CEO John Krafcik said in a blog post Tuesday the selected space is the "perfect facility" that provides space up to 200,000 square feet to expand Waymo's operations. He also cited the region's talent from which it will hire engineers, operations experts and fleet coordinators.

Both Mayor Mike Duggan and Gov. Gretchen Whitmer made statements about the announcement. Duggan said, "I think a major statement was made today in the battle of Detroit and Silicon Valley that a major Silicon Valley company has said the future of vehicles in the city of Detroit." Whitmer said the decision further cements "Michigan as a leader in mobility and the epicenter of advanced automotive manufacturing."

Waymo was the recipient of an $8-million state grant from the Michigan Economic Development Corp. that requires it to open with 100 employees by 2021.