Going on two years after the ribbon-cutting at Little Caesars Arena, one national media outlet came to town to point out what the locals have started to notice: the quid pro quo the Ilitch organization promised has, shall we say, failed to materialize. And "hearing it all in one place sure is depressing," writes the Free Press' Nancy Kaffer. 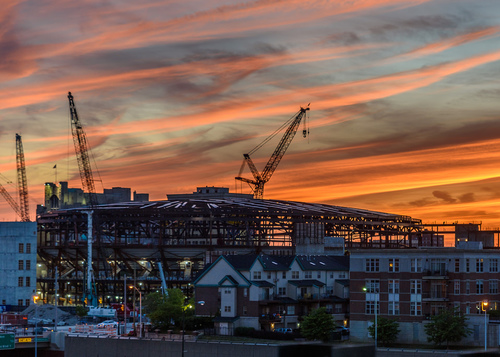 The Ilitches got hundreds of millions in taxpayer quid for their arena project, and promised the quo pro of jobs, growth and "District Detroit," a collection of European-style neighborhoods that would bloom in its shadow. But?

The justification for that substantial public subsidy, drawn from tax dollars intended to support schools (in a city literally on the brink of bankruptcy back in 2013 when the arena deal was announced), was that the public would benefit. Almost no politician can resist the prospect of job creation. It's basically catnip. The promise of new housing in the arena district didn't hurt. And the new arena, its supporters said, would connect Detroit's thriving Midtown and downtown, eliminating the doorstop of blight betwixt the two.

As for the rest? The Ilitches had promised that Detroiters would be 50 percent of the arena construction crews. Didn't happen. Property records show that the area around the arena was blighted in part because the family's companies purchased property and allowed it to rot in order to drive prices down and to discourage other developments in their planned arena's footprint.

The Ilitch organization has pushed back, calling the report "sensationalized and inaccurate," but not stating when it might break ground on the residential piece of its plan.

Of course, as the Terrible Ilitches have pointed out again and again, if only we'd had a memory longer than an elephant's, this could have been avoided.