This weekend's death of Judge Damon Keith, a veteran of 42 years on the federal bench in Detroit and Cincinnati, brings salutes from elected officials, family members and many other admirers.

They include tributes from professionals who say Keith's support was a career turning point after they graduated from law school.

"Thank you, judge. I would not be who I am today with out you," posts Jocelyn Benson, now Michigan's secretary of state. Here's what she and two others say Sunday. 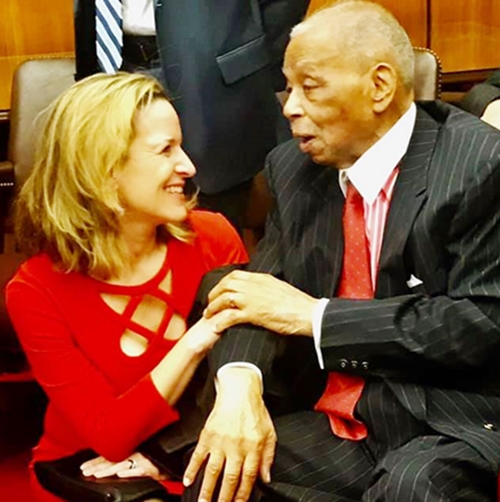 I moved to Detroit almost 15 years ago to clerk for one of our nation’s most iconic civil rights jurists and leaders. In reflection of Judge Damon Keith’s leadership and his devotion to seeking true equality and justice in our city and state, I stayed.

With his support and guidance I built a career in voting rights and -- due in large part to his encouragement -- served as dean at Wayne State University Law School [2012-16], where we created the Damon J. Keith Center for Civil Rights to inspire the next generation of advocates for justice to continue his legacy.

He instilled in me the principle that "democracies die behind closed doors" and reminded me just a few months ago when he swore me in to office to continue to champion and follow this guiding light in seeking a fairer and more just society.

I cannot imagine a world without Judge in it; he inspired me to do good every day. We can ensure his legacy lives on through exemplifying his enduring courage and lifelong devotion to equality and justice for all. Thank you Judge. I would not be who I am today without you.

Judge Keith spoke at my graduation from Cass Tech High School in 1968. It was looking and listening to him that I realized I could be a judge. He exemplified to a 16-year-old Cynthia what she could do.

And he was an individual who . . . aggressively recruited, hired and promoted black excellence through the years. His law clerk roster was a hall of fame, including Lani Guinier and Jennifer Granholm.

I was Damon Keith ‘s senior clerk from August 2013 to August 2014. Judge Keith married my husband and I on April 26, 2014. It was a year I will never forget, a year that shaped who I am indelibly. Rest in power, judge.