Pontiac's central business district, which has a ways to go before it looks like a vibrant downtown, is getting more security. 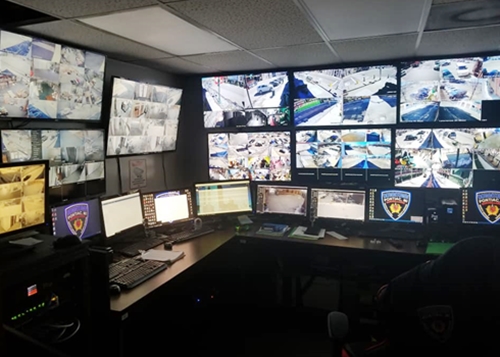 The security service sponsored by merchants, landlords and other businesses currently monitors 133 cameras from this command center. (Photo: Facebook)

The Downtown Pontiac Surveillance Group is adding 100 surveillance cameras this summer as it prepares to renovate its surveillance center with a $10,000 Flagstar Big Idea Grant, writes Natalie Broda of The Oakland Press:

The group, launched in 2018 by Tim Shepard, owner of the Riker Building and Brian Carr, a public safety officer, works with downtown property owners to purchase and install high-definition security cameras which are monitored out of the basement of the Riker Building. In October, there were about 57 cameras between five properties.

Today, a total of 133 cameras monitor downtown between 13 properties. Eight more properties are currently scheduled for an installation, conducted by Burton-based Garjen Technologies. By the end of the summer, Shepard said 100 more cameras should be in place.

"Our mission is to maintain a safe and friendly environment for all of our local business owners," the group posts on Facebook.