Reefer madness? Fifteen pounds of weed will not 'poison our youth' after border seizure

A press release came in over the transom Thursday from Customs and Border Protection in Port Huron. Big drug bust last week -- nearly 15 pounds of marijuana coming in from Canada. The statement read, in part: 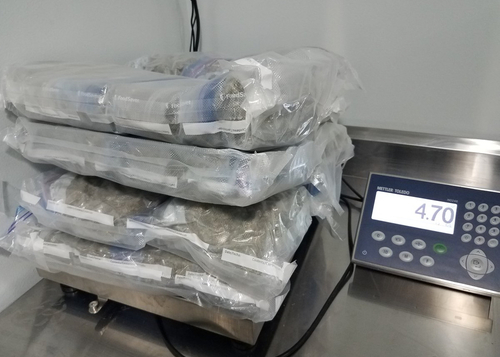 Dope on the table. (Photo: CBP)

On April 26th, CBP Officers identified two separate shipments via Canadian mail trucks that were labeled as bed clothes and selected them for an enforcement examination at the Centralized Examination Station in Marysville, MI. Upon inspection of the packages, vacuum sealed bundles of Marijuana were discovered. The packages were tested and revealed a positive finding for the properties of Marijuana and were seized under federal law.

Unanswered question: Who bothers to smuggle marijuana in from a country where it's legal to a state where it's also legal? Also unanswered: The CBP puts the street value of this haul at $53,000, which sounds a little inflated. But it was worth reading for this fantastic quote:

“Over $50,000 of illegal drugs will not make it into our streets to poison our youth, and for that, I truly commend our officers’ steadfast effort in protecting our nation,” said port director Michael Fox.

Based on who we see using marijuana in Detroit, the risk is likely more to grandpa than our youth, but OK.