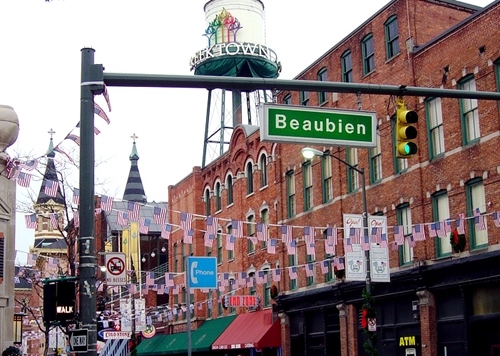 There is, according to the National Weather Service, a 70-percent chance of rain this evening.

And Sunday night, three more people were wounded after being blasted in a hail of gunfire in the downtown Greektown district, and another man was shot nearby, near the ballpark.

In the Greektown shooting, police are asking the public to be on the lookout for a man in a hoodie and white sneakers. He (or she) should be considered armed and dangerous.

Violence in downtown — especially Greektown — is becoming as common as a the weather report. Despite the fact that the entire area is a Greenlight District – that is, heavily monitored by police through closed circuit cameras — the stabbings and shootings continue. So bad is it that Police Chief James E. Craig recently announced a beefing up of police in the area, while at the same time claiming crime in Greektown and the city as a whole, continues to fall at unprecedented levels.

But how do we know that? Like so much else going on downtown, much of the success appears to be soap bubbles cranked out from a public relations hand organ.

A close examination earlier this year by Deadline Detroit and Motor City Muckraker of the city's crime statistics and emergency response times show the chief's claims to be wildly inflated at best. Emergency calls to 911 are up, arrests are down, response times to the most serious of crimes is more than 40 minutes.

There are less police — and yet crime is down? (Here is our four-part January series).

Then think about this: a request by Deadline Detroit to the Detroit Police Department for a list of all shooting victims in the city over the past decade has gone unanswered.

State law gives a public body three weeks to supply the public information under the Freedom of Information Act. It seems simple enough.
I've been waiting two months for data that should be available at the click of the print button.

Sir, you are in violation of the law.

I'm not alone. The Washington Post threatened legal action when homicide data was not promptly produced. Vice News was told it would take 12 years for the department to tabulate police involved shootings over a five-year period at the cost in excess of $70,000. My colleague at Deadline Detroit, Violet Ikonomova, recently asked the police department for information on crime cases in which camera footage from Project Greenlight led to an arrest. The Police Department told her it would cost $4,533.82 to retrieve this information that it routinely tosses to the public like dog biscuits. (The total would have been closer to $10,000, but DPD offered a discount because it was late in responding to the request.)

I remember when Craig called me late one evening in 2013 when he was interviewing for the Detroit Chief of Police job. He asked me for advice. I told him he should tell the truth about crime, since every chief before him was downplaying the problem and fudging the numbers.

After all, you can't fix a problem if you don't acknowledge the problem.

So much for that. It seems like the only thing that really changes around here is the weather.