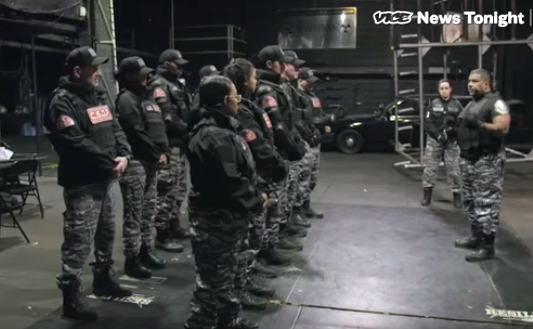 With a dearth of Detroit police officers, it's not unusual to walk around downtown and see armed private security forces walking the streets. You can also find private patrols around the city, including in Palmer Woods in the northwest section of the city.

HBO and Vice News Tonight posts on YouTube about paralmilitary guards around the city:

In 2013, the city of Detroit filed for bankruptcy. As a result, budget and pay cuts have since pushed police officers toward better paying opportunities outside the city, and private security companies have rushed into the city.

Now, private security is a booming industry in Detroit. The largest contractor has reported 25% year-over-year growth since the city’s bankruptcy.

Vice News spoke to Dale Brown, an ex-army paratrooper, who began teaching his own brand of self defense in the early 90's and started his own Detroit-based security company called Threat Management Center in 2000. Brown says his 60-person VIPER force has more than 5,000 private citizens as clients along with 100 businesses. Altogether, the company brings in about two million dollars a year.

The impact of private security on the crime rate in Detroit is unclear.