It pays to be an Ilitch. It pays very well. And soon, it'll pay $74 million out of the public purse, and you'll never guess for what. Let the Detroit Free Press explain: 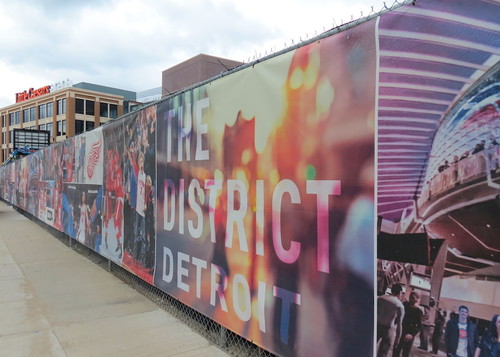 This is nothing behind that construction barrier. Nothing residential, anyway.

The Ilitch organization is set to receive $74 million in additional Detroit taxpayer subsidies for meeting nearly all of its contractual obligations for the new commercial district surrounding Little Caesars Arena, which was recently the subject of a critical HBO report.

That money will be on top of the $324 million public tax contribution toward construction of the arena itself.

Tough toenails, folks. Olympia Development has held up its end of a promise to make at least $200 million in building investments within the arena district, and if that goal was met largely by doing their own projects -- the Little Caesars headquarters on Woodward, the Google office in the arena and, yes, two parking decks, well, that's what the agreement says, and they're not leaving $74 million on the table.

Note this backpedaling from the city:

Negotiations for the contract occurred while Detroit was under emergency management and, according to a city spokesman, then-newly elected Mayor Mike Duggan was excluded from participation in those talks.

They know how the public feels about this. In other words, don't blame the mayor. Anyway, as Littlefinger says, "Chaos is a ladder." Watch and learn.