Fishing for trash: One father-son idea to start a new sport for environmental cleanup 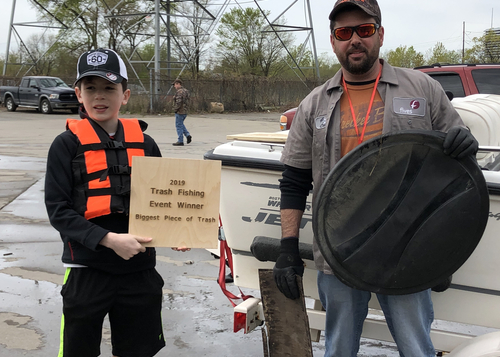 “It’s like regular fishing, only we're fishing for trash,” he said. Fair enough.

The “we” in this case is Nardone and his 12-year-old son Mark, whose idea this was, kinda. Mark wanted his dad to buy a boat, but his dad wanted them to do some good with it, not just be a couple of suburbanite gas-guzzlers zipping around the lakes and rivers of this very boat-intensive region. 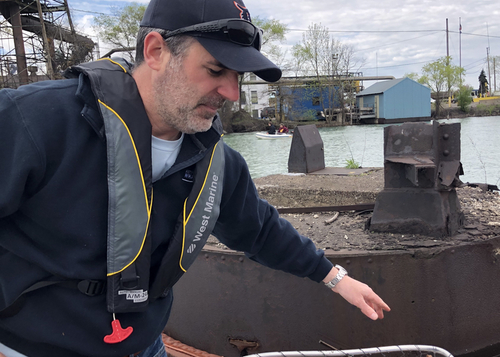 And that’s how they came to buy one boat, a tiny inflatable, and then a somewhat larger boat, a center-console Boston Whaler, and birth the competitive sport of trash fishing.

Yes, a sport. Yes, a competition. If bass fishing can be turned into one, with sponsors and endorsements and branded equipment, why not trash fishing? Bass fishing ruins a fish’s day; at the end of a day of trash fishing, the surrounding area is at least a little cleaner.

Saturday was the first outing in the first official trash fishing season. The weather wasn’t perfect, and there wasn’t much turnout at the city’s public boat launch in the Delray neighborhood in southwest Detroit-- just the Nardones and three other guys in two other boats. But Tom isn’t bothered by stuff like that.

He was the brains behind the Mower Gang, which started out as an excuse to buy a riding mower, and ended up getting international publicity, after a couple dozen people joined in with their own mowers to clean up Detroit parks -- pre-bankruptcy, when so many had fallen into neglect.

They reclaimed the Dorais Velodrome, a bike-racing track with saplings growing from cracks in the graffiti-covered pavement. Reporters covered the Mower Gang’s activities; Slate’s profile of Nardone was headlined “Philanthropist. Family Man. Sex-Toy Tycoon,” and called him “a 21st-century American hero.”

The headline references PriveCo, Nardone’s first entrepreneurial venture after getting out of the automotive business. He sells sex toys and other stuff to people too embarrassed to walk into a shop and pick one out in person, a proverbial plain-brown-wrapper value-add. Next came BulletSafe, low-cost bulletproof vests, strike shields and other products, affordable for people who need protection but whose employers won’t provide it; security guards, mostly, but lots of others buy them in this violent age.

Mowing and trash fishing aren’t for-profit endeavors, but just-for-fun stuff that channels Nardone’s imagination and creativity into interesting sidelines. He has an Eagle Scout conscience and sense of social responsibility, with a day job selling vibrators and bulletproof vests. 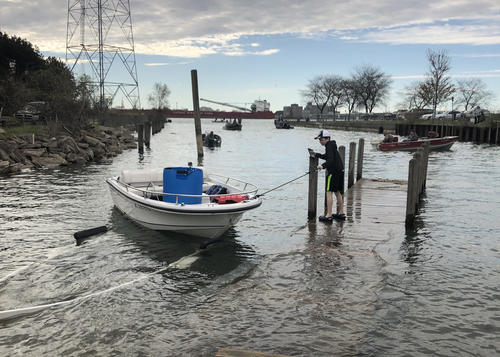 Mark Nardone secures the boat after launching in Delray.

But back to Saturday. The day started out sunny and chilly, then turned overcast and chilly. The launch off Jefferson was crowded and busy with anglers after the spring walleye run. They side-eyed the trash-fishing flotilla, which was not impressive – besides Nardone’s Boston Whaler, there was Charlie Spiess in a dinky Porta-Bote, and Kevin Reini and Don King in Nardone’s old inflatable, just big enough for two people and probably overpowered by its 9.9-hp outboard.

How the Day Starts

High water has the dock at the launch almost entirely submerged, and getting underway gave almost everyone wet feet on a day when it was more pleasant to have dry ones. But after a few tugs on the pull-ropes, everyone was headed downstream to the target for the day – Zug Island, at the mouth of the Rouge River. The river flows around it via a man-made channel, a perfect place for trash to collect. 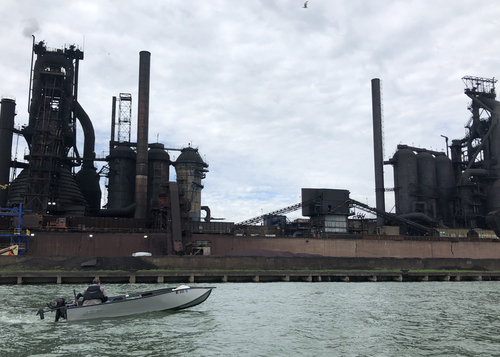 The black structures of the U.S. Steel plant loom over the channel, making it a perfect place to do a little good, although one might wonder why. No one comes back here to go water-skiing. You get the feeling you could dip a toe in the water and pull back a steaming toe bone. But look closer, and life abounds. Canada geese line the shore under the plant, honking at the trash fishermen. A heron rests on a fallen log, accompanied by a sunbathing turtle. And shoreline trash has a way of migrating, from this zombie-apocalypse movie set to more pleasant recreational areas.

So it was worthwhile work, and after turning into the channel, the competition was on.

Many tight lines, so to speak

Spiess got the first obvious catch, a boat bumper that stood out on the shoreline. Nardone’s boat went across the channel to an eddy, where chunks of styrofoam floated among some sort of fiber batting insulation. Mark and his father used trigger-operated grabbers and a net with a telescoping handle to scoop up random bits of indeterminate flotsam. 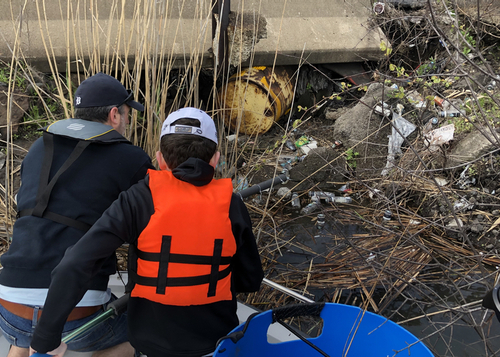 Tom and Mark Nardone find a spot to haul in trash.

But there wasn’t anything good – i.e., interesting – and so they crossed back over to “the honey hole,” another eddy they discovered last year, when they were just getting started. It was filled with more styrofoam, more fiber batting, and quite a few pieces of human-tossed crap – go-boxes, fast-food cups and that scourge of the modern age, the single-use water bottle.

Most of these things, Nardone speculated, were probably not tossed out a window on purpose. They may have gone into an overfilled trash barrel and blown off the top. The water bottles were on someone’s boat and slipped overboard somehow. Carelessness, not necessarily malice, landed them here, tangled in the phragmites sprouting from the waterline.

A few more yards downstream, though, was malice. On a slope coming down from a Zug Island parking lot, a rockslide of litter spilled down to the water, and stupid litter at that – bottles of Starbucks pre-mixed drinks, mostly, more water bottles, more fast-food detritus. Red-winged blackbirds scolded from overhead as piece after piece went into a 55-gallon drum aboard.

Mark snagged a sizable boat bumper. “That’ll make a nice trophy,” his father said. But there was far more to pick up.

We are one trashy country

Spend a little time doing this, and it’s easy to come away hating modern life, so crammed with worthless crap like single-use plastics, bottled tea and so, so many cheap water bottles, for a nation that has forgotten that what comes out of the tap is almost certainly just as good and certainly cheaper. 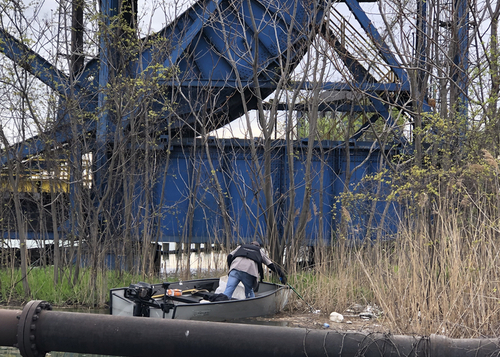 After making a dent, they backed the boat out of this motherlode of garbage and opened the throttle for a quick run down to the mouth of the Rouge, then found another honey hole on the way back, with real-pollution plastics. A bottle of antifreeze. Another of motor oil. More Starbucks. More Aquafina. A spot of red turned out to be a fire extinguisher, which Mark hauled aboard.

After about 90 minutes, the cold started to penetrate. Nardone said they try to make trash fishing more fun than grim duty, and both he and Mark have about a two-hour attention span before the fun wears off. Besides, the barrel was full by now, and the other two boats had filled their onboard receptacles as well. Communicating by walkie-talkie, they decided to head back to the launch for the trophy presentation.

In a real fishing derby, the catch would be weighed and released. Trash fishing doesn’t have scales yet, and everybody’s friends, so the awards were determined more casually. Spiess won for Biggest Piece of Trash (a garbage-can lid); Reini and King for Most Unusual (a golf-cart wheel, or maybe from a hi-low), and Mark and Tom awarded themselves Most Collected for their overflowing barrel. Nardone will deposit the catch in the dumpster at his Troy office, and all will be back to trash-fish another day. 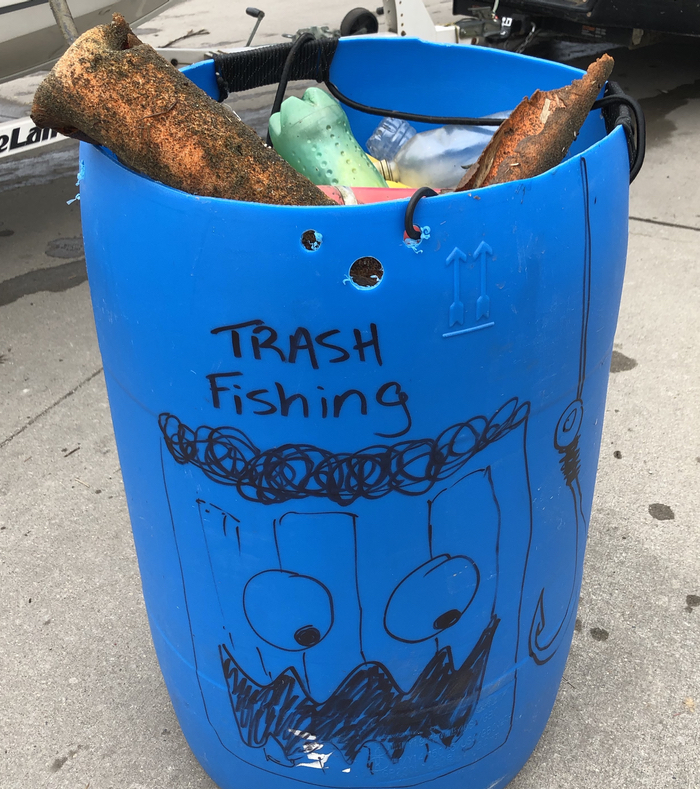 Limited out, but plenty left behind for next time.

Nardone has had success asking lawn equipment companies to contribute for the Mower Gang; Craftsman, Husqvarna and others have donated tractors, a chain saw and more to help volunteers clean up Detroit parks. He’s hoping Boston Whaler or other companies might be willing to chip in, in a similar spirit of getting good work done while having fun. So far they’ve gotten some T-shirts and fleece; a good start.

For now, though, they need more trash anglers. Do you have a small boat capable of pushing in close to a shoreline. Nitrile gloves? A passion for environmental improvement? Go over and “like” the Facebook page. The season has only begun.