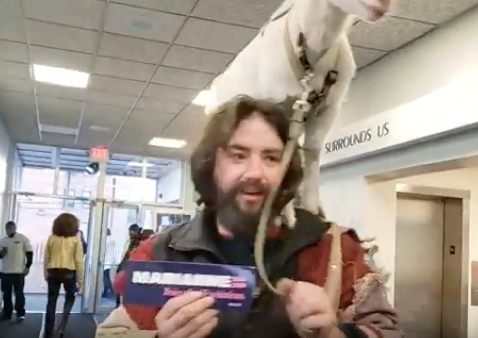 Wonder what it's like to bring a goat to a presidential candidate's town hall meeting? Wonder no more.

The "Detroit Goat Man", Erick Brown, brought his goat to a forum Monday for longshot Marianne Williamson at the Detroit Unity Temple,17505 2nd Ave. At times he had to tug on the goat's leash to get it to move. At other points, he simply hoisted the goat on his shoulders while he walked around and garnered attention.

For the past few years, he traveled the country on a bus with his pet goat. In 2017, he fell in love with Detroit and decided to stay.  John Carlisle of the Freep wrote in 2018 that Brown "suffered a traumatic brain injury when he was a toddler. He doesn’t talk or act like other people. He’s socially awkward and childlike."

Williamson, a Houston native, is a best-selling author and lecturer, as well as a fiend and adviser to Oprah Winfrey. In 2014, she ran unsuccessfully for Congress in California.