Roseanne Barr Is at the Fox on Sunday -- What Can We Expect? 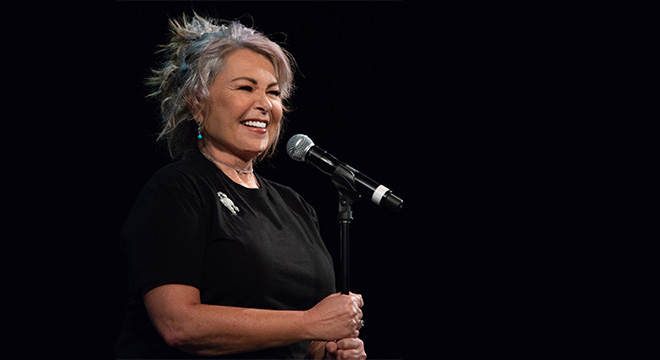 In March 2018, Roseanne Barr's star was rising quickly again. Her sitcom “Roseanne" had returned to ABC and the ratings were great. Then came the crash two months later. Barr unleashed a racist tweet about Valerie Jarrett, an African-American woman who worked in the Obama administraiton: “muslim brotherhood & planet of the apes had a baby=vj."

Her TV show was cancelled.

Now Barr is doing the comedy circuit around the country. On Sunday, she performs at the Fox Theatre at 7 p.m. Hundreds of main floor and balcony seats are available, Ticketmaster shows.

Based on a reivew of a May 4 show in Pennsylvania, audience members will pretty much get what theu expect.

At one point during her performance, she asked those in the audience of about 1,000, how many support President Donald Trump, to which she got a solid reponse, according to The Morning Call newspaper.

“I think I found my crowd," she said. “Damn, I love our president."

Reviewer John Moser of the paper in Allentown, Pa., writes:

Liberally using blue language, she told jokes about kids, her many marriages, weight and dieting, aging (she’s now 66), differences between men and women, drinking alcohol, the Kardashians and her love of crime TV.

She beat up equally on her Jewish background (at one point calling herself as a “big-mouthed Jewish mother--ker“) and the Catholic church.

Certainly some of her material had a conservative bent – she blasted Hollywood, and blamed U.S. House Speaker Nancy Pelosi (whom she said was a former drinking buddy) for ruining San Francisco.