Update: Detroit Artist Ann Lewis Tells Why She Calls Out 'Gentrification in Progress'

This lasted just a few hours early on May 18. (Photos: Instagram, Ann Lewis)

Protest art last weekend at Eastern Market "has plenty of staying power," the Detour Detroit biweekly newsletter says in setting up an essay by Ann Lewis, who's behind the banner above and caution tape-style displays at three storefronts.

In her 740-word explanation, Lewis tells how the short-lived installation targeting landlord Sanford Nelson fits into a project she calls "Define Progress" and how she balances an anti-gentrification stance with being a homeowner who came from Brooklyn in 2016. "I completely get why people may respond negatively to someone who wasn't born and raised here discussing gentrification," she writes.

I've lived here for two-and-a-half years and have spent that entire time listening, observing and learning about Detroit, who Detroiters are, what is important to them and why the city is the way that it is. I didn't come in with New York guns blazing, usurping resources and opportunities. I sat quietly, listened and knew it was not my place to say a damn thing. . . .

People can paint "transplants" with a broad brush, but we're not all gentrifiers. Many of us want to integrate into the community -- which, to be honest, is super hard in Detroit. . . . [That] is why I waited so long to do anything that made waves. 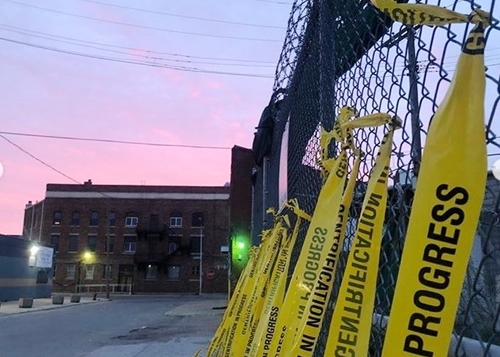 "I've been having this coversation for years," says Ann Lewis, who posts this on Instagram.

Notably, Lewis brings the experience of "someone who has been displaced because of gentrification (my whole 28-unit live/work building in Brooklyn was evicted to make way for luxury rentals)."

Displacing businesses that have served the community for decades is incongruent with the Detroit I have spent the last two years observing. . . . When outsiders come in and buy up a ton of land and properties, and profit off of the hard times Detroit has seen -- it doesn't feel right to anyone. I get that.

I get that people might think that's who I am. Detroiters have no reason to trust me, and I know I have to build that trust. Calling out situations like this is a first step. People may think it's hypocritical until they get to know me and understand I've been having this conversation for years.

Her full statement is worth reading at Detour.

An Eastern Market block that has been wrapped up in controversy since its purchase by a young Oakland County entreprenuer was wrapped up in caution tape early Saturday morning, warning "Gentrification in Progress."

According to an Instagram post by Ryan Patrick Hooper, of WDET's "Culture Shift," the artist behind the protest piece is Ann Lewis. She's a former contributor to the area's annual Murals in the Market festival, and has received national attention for similar work in New York in 2014. We were unable to immediately reach Lewis for comment.

A post shared by Ryan Patrick Hooper (@ryanpatrickhooper) on

The caution tape statement comes four weeks after Russell Street Deli said it would close based on a dispute and proposed rent increase by landlord Sanford Nelson. Mootown, an ice cream shop in the building, has also closed, and the nearly all of the artists' lofts upstairs  were vacated last year following proposed rent hikes.

Hooper's photos show caution tape all over the building that houses the deli, Mootown, Supino Pizzeria and Zeff's Coney Island.

The tape had been taken down by mid-morning as the market became packed with people.

This isn't the first time artists have targeted the Nelsons over their movings in the market. Last year, during Murals in the Market, someone hung a banner from a water tower that said "Something smells rotten in Nel$onville — Don't trust Sanford and Lindon" (sic), referring to Linden Nelson, Sanford's father, who is a part of the investment group that has bought 20 buildings in the market for $25 million. That piece managed to stay up all weekend, as thousands of people visited the area.