But the current representative from south of Grand Rapids and the past one from San Francisco share Republican affiliation and something else. Each is an out-front maverick, the first member of his party to call for discussion of presidential impeachment. 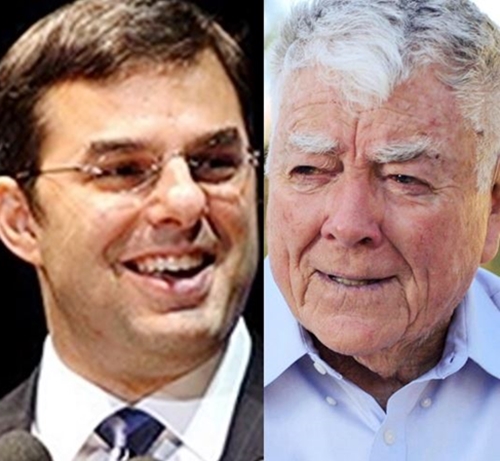 Four and a half decades apart, Justin Amash and Pete McCloskey boldly went where no party colleague yet had dared.

The link between these pioneers is cited by New York Times editorial board member Cristian Farias, who writes that the fifth-term West Michigan congressman "pulled a McCloskey of sorts."

He became the first Republican in Congress to say that the report of the special counsel, Robert Mueller, showed that President Trump had committed impeachable offenses.

"Mueller's report reveals that President Trump engaged in specific actions and a pattern of behavior that meet the threshold for impeachment," Mr. Amash wrote on Twitter. ...

What is remarkable about Mr. Amash's stand is how much tougher it is than that of the House's Democratic leaders to date. . . . Like Mr. McCloskey did all those years ago, he concluded that Mr. Trump's pattern of obstructive behavior was enough for the House to fulfill its constitutional duties.

The Times links to a digitized article published 46 years ago on Page 26. Its lead sentence says McCloskey "announced today that he would ask the House of Representatives to consider whether President Nixon should be impeached for 'obstruction of justice.'" 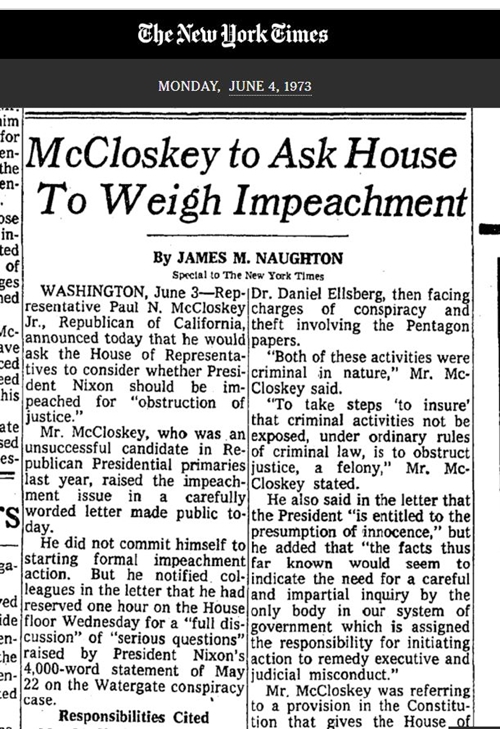 Nearly half a century ago, another Republican boldly went where no party colleague had.

The Californian, a decorated Marine veteran of the Korean War who won eight House terms (1967-83), cited "serious questions as to whether probable cause exists to believe that the president was guilty of the obstruction of justice." He's also quoted as saying:

"The facts thus far known would seem to indicate the need for a careful and impartial inquiry by the only body in our system of government which is assigned the responsibility for initiating action to remedy executive and judicial misconduct. . . .

"The constitutional power granted to the House also represents a duty on our part."

Amash, who posted two Twitter threads about the current president Saturday and Monday, makes strikingly similar points as he goes where no party colleague yet has dared:

"[Robert] Mueller’s report reveals that President Trump engaged in specific actions and a pattern of behavior that meet the threshold for impeachment.

"In fact, Mueller’s report identifies multiple examples of conduct satisfying all the elements of obstruction of justice, and undoubtedly any person who is not the president of the United States would be indicted based on such evidence. . . .

"Our system of checks and balances relies on each branch's jealously guarding its powers and upholding its duties under our Constitution."