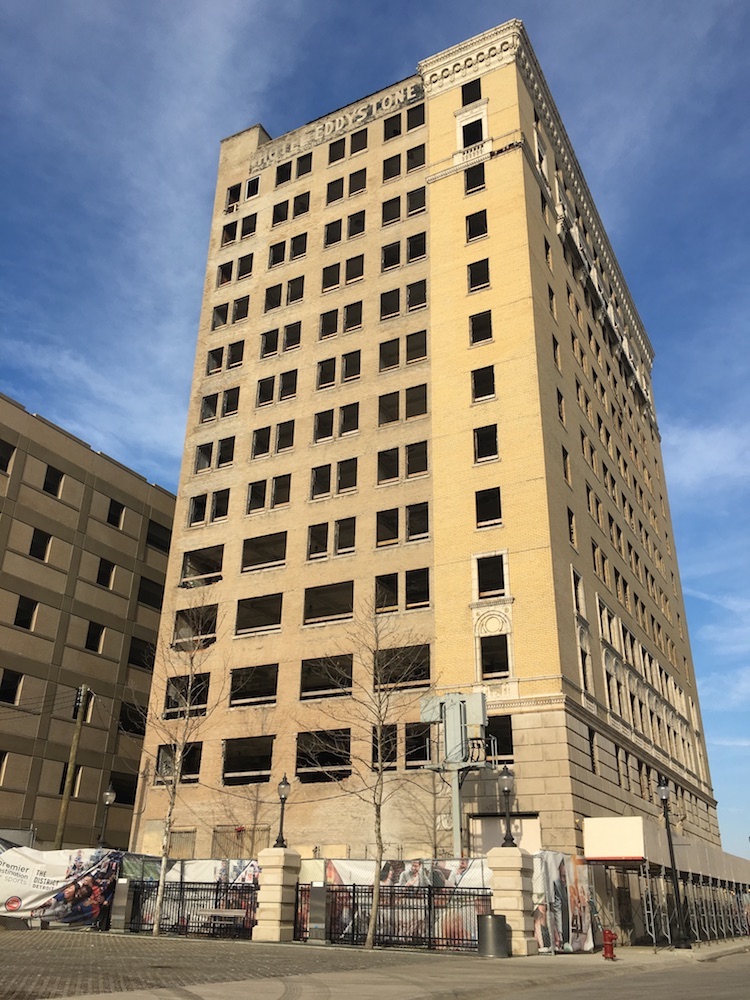 The Detroit Downtown Development Authority Wednesday unanimously approved a deal that requires the Ilitch organization to rehab the Hotel Eddystone by early 2023 and put up a surety bond that would allow the DDA to take over the project in the event of delays.

The new deal for the $40 million redevelopment comes after months of heightened scrutiny of the Ilitch organization and the development authority tasked with holding it accountable for projects around the taxpayer-subsidized Little Caesars Arena. The Ilitches' Olympia Development has thus far failed to develop the 50 blocks surrounding LCA as promised.

An amendment to the contract the DDA and Ilitch organization inked in 2014 sets up specific timelines for the project. If the organization falls behind schedule, the DDA can tap into a $33 million performance bond and finish the project itself. The amendment also adds the city as a third party, meaning it could take action if the DDA fails to.

The plan is to convert the 13-story windowless structure into a mixed-use residential building with 20 percent of units set aside as "affordable" for individuals earning about $40,000 per year.

When asked by a board member about delays at the Wednesday meeting, a representative for the Ilitch organization blamed the loss of a development partner, American Community Developers, that was to help the organization on several residential projects. The two companies "didn't have the same vision," the representative said, prompting Olympia to assemble its own in-house team for the project.

A DDA representative said it allowed the Ilitches to lapse without penalty because its only option under the existing contract was to sue the company over delays, which could have allowed the building to idle even longer.

Residents who've been closely monitoring the deal were happy with the new plan, but said the DDA should do more to hold the Ilitches to account.

"The proposed performance bond with benchmarks is a start, but what else? What about requiring ODM to disclose all its district holdings to a third-party monitor, to track compliance, as well as help ensure other historically designated structures are properly secured?" said Francis Grunow, chair of the neighborhood advisory committee that covers the arena district.

"I wonder if there are other ways to step up the accountability. I think this is a step in the right direction, but it isn’t enough," said Eric Kehoe of Preservation Detroit.

Both Kehoe and Grunow were concerned by word that the Ilitches plan to seek incentives to complete the project. The Hotel Eddystone is a federally designated historic landmark, and could be eligible for preservation tax credits and other state and local abatements.