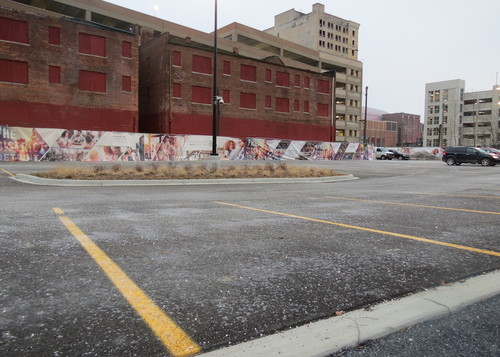 Amid ongoing criticism over a lack of progress and transparency in the development of its so-called District Detroit, the Ilitch organization has put up a Help Wanted sign for a marketing and communications director in the area surrounding Little Caesars Arena.

A job opening on GlassDoor seeks a candidate who will develop a strategy to “elevate awareness of the District Detroit and drive guests and businesses to the area. The position will also be responsible for the marketing of Olympia Development and its retail, office and residential leasing efforts” within the area. The person would additionally be responsible for planning programming for some planned outdoor spaces.

The Ilitch organization did not respond to an email asking about the status of the listing, which Glass Door says was posted in the last 30 days. A version of it posted to LinkedIn Jobs says applications are no longer being accepted.

To an optimistic reader, or one with no knowledge of the Ilitches' track record, the opening suggests that something more than parking is on the horizon. The area is currently a sea of surface lots and vacant Ilitch-owned buildings, though some specific retail tenants have been announced and construction has been underway for a while on what the Ilitches say will be a “European-style promenade” on Columbia Street (the promenade was to open last summer).

“It’s common in a corporate structure to have dedicated marketing directors to various divisions of a corporation, and if [the Ilitch organization is] starting to see District Detroit as a division of its business, that means there must be something there to market. ... Because what would this person do if there wasn’t more?” said Matt Friedman, co-founder of the Farmington Hills-based Tanner Friedman PR firm. However, he cautions, “There are jobs that get posted and never get filled. A job description is not necessarily a signal of a strategy.”

Nor does the position necessarily signal a shift in the way the Ilitches communicate the goings on (or lack thereof) within the District Detroit, said Friedman. The organization has been notoriously mum amid an onslaught of negative media coverage on the local and national levels. That is, until yesterday, when Ilitch Holdings CEO Chris Ilitch read prepared talking points out loud to select members of the media as part of a charade to mimick an interview.

“Typically in a corporate environment, someone at the director level would have several layers above them where strategy and messaging would be dictated,” said Friedman. “According to this job description, this director would be on the front lines of media when it comes to the District Detroit … but based on my experience, decisions on how to respond to sensitive stories are made at the top of the organization.”

For now, we have a hint that secrecy will remain part of the Ilitches' strategy moving forward. The job requirements include exercising “Extreme discretion, as work may involve confidential and sensitive information.”