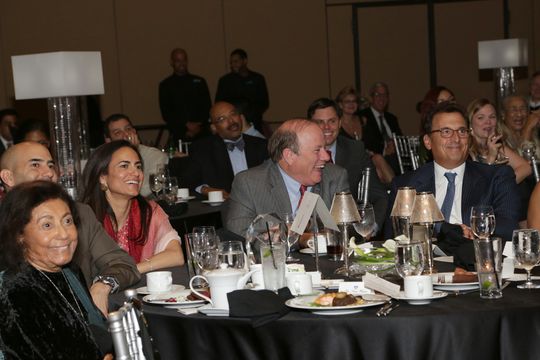 Dr. Sonia Hassan is next to the mayor. (Photo: Make Your Date)

She gave the mayor her garage door opener and Hizzoner gave her keys to the castle. Now he's treading in hot water.

Mayor Mike Duggan provided his gal pal, Dr. Sonia Hassan, with all the city resources she would need for her prenatal women's health program being run out of Wayne State University.

City grant money flowed into her Make Your DateTM program (yes, the name is trademarked). The Detroit Free Press reported the mayor's chief of staff and chief development officer were enlisted to help raise money.  He hosted a big gala for the program; he sat at her table laughing it up over $500 a plate dinner that was emceed by a local media celebrity. The entertainment was comedian Louis Anderson, the lovable fat man. Most people brought their spouses. Not Mike.

And now Deadline Detroit has unearthed a city video produced 10 months ago where the city's director of the city's health department says at the 36-second mark that it was all Mike's idea to create Make Your Date (which happened to be headed by his gal pal).

Caught red handed, Mike plays dumb. He plays word games – verbal ring-around-the-rosy – as to whether the city's money went to the program, the non-profit, or the university hosting the program. He welcomes an investigation brought by an  Inspector General, whose impartiality has come under question, as she formerly worked in Duggan's Law Department.. In the meantime, Hassan threatens to sue The Free Press for libel over word choices in this May 9 article by Joe Guillen and Kat Stafford.

Those close to the couple say they've been palling around for years. She was on his mayoral transition team, for one. They were caught at her suburban home on surveillance tape, for another, by the private eye paid for by Bob Carmack, the mayoral pain in the ass who is on trial and feuding with Duggan over a real estate deal gone wrong.

And now Duggan's wife has left him.

When you control the levers of power, you don't have to take envelopes. That's bush league. That's Kilpatrick stuff. The truly smart machine boss uses his influence and other people's money to make himself a date.

A spokesman for Dr. Hassan confirms it was the mayor's idea to create the program.

It was all for the betterment of children, insists John Roach, the city hall communications director. Here is his statement in full:

"Since its launch in 2014, Make Your Date has served thousands of pregnant women in the City.”

I'll leave it to you, dear reader, to guess the identity of the aforementioned associate dean.

It's a great program, the mayor's man seems to be saying. An important program. A successful program.

So let's look at the data. Infant mortality and preterm births have gone up in the city since the good doctor started this amazing program. Data doesn't lie: Prenatal death stats and premature births.

It's just that nobody bothers doing the math.

Take a hard, honest look what's going on in Duggan's post-bankrupt Detroit: federal lawmen are scheduled to be in town again next week knocking on doors in connection with that long running demolition corruption probe. The FBI is also said to be collecting paperwork on that fishy Fiat Chrysler deal that the mayor says is the highlight of his administration.

And the city is a shooting gallery and summer has yet to arrive. There aren't enough ambulances to even show up when a cop gets shot. Public giveaways to billionaires who renege on their development promises.

The prenatal program may not be the filet mignon of municipal backroom dealings, but it is a chance for us all to see how the sausage gets stuffed in Detroit.