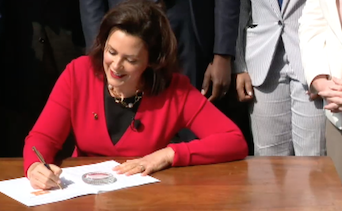 ...Detroit Mayor Mike Duggan, who filed a lawsuit last year asking that the 1973 no-fault law be declared unconstitutional for failing to provide fair and equitable insurance rates, said the bipartisan agreement is "outstanding" and "will cut rates for Michigan drivers significantly."

The compromise came the same week that billionaire businessman Dan Gilbert took initial steps toward launching a ballot drive as a "failsafe" in case the Legislature and governor did not enact legislation. The move would have enabled GOP lawmakers to overhaul the insurance law without having to worry about a gubernatorial veto.

It's a big win for the governor and the legislature. Next comes the fight over road funding, but a significant break on car insurance may soften the ground for Whitmer's proposed gas-tax increase.

Here's the moment it happened: