“Are you my dad?” “How many crotch holes is too many in a pair of jean shorts?” “What are the ideal number of layers in lasagna?”

If you had a question last summer — any question — the guy in a powder blue blazer on a billboard in Corktown was your man.

The "Questions?" billboard invited hundreds, if not thousands, of random text messages from the public, and Questions Guy responded to each one, reportedly just “for the fun of it.” Questions he wouldn’t answer, however, included those about his identity and the purpose of the billboard.

It wasn't until he was eventually tracked down by the Detour Detroit newsletter that we learned Questions Guy was in fact one Jheremie Jacque, a 43-year-old who's in a couple of bands and daylights as an employee at a nonprofit. And no, he isn't trying to sell you anything.

Though Jacque has reportedly left Detroit, he has continued the “for the fun of it” project. Billboards taken out since his “Questions?” heyday have featured a fake Detroit news team and played on personal injury attorneys — Detroit’s most ubiquitous billboard characters. One asked, “Injured by injury? Spaceship hit you?” A billboard currently posted at the corner of Michigan and Trumbull depicts Questions Guy and two women as zombies: “The Only law firm for the undead.” 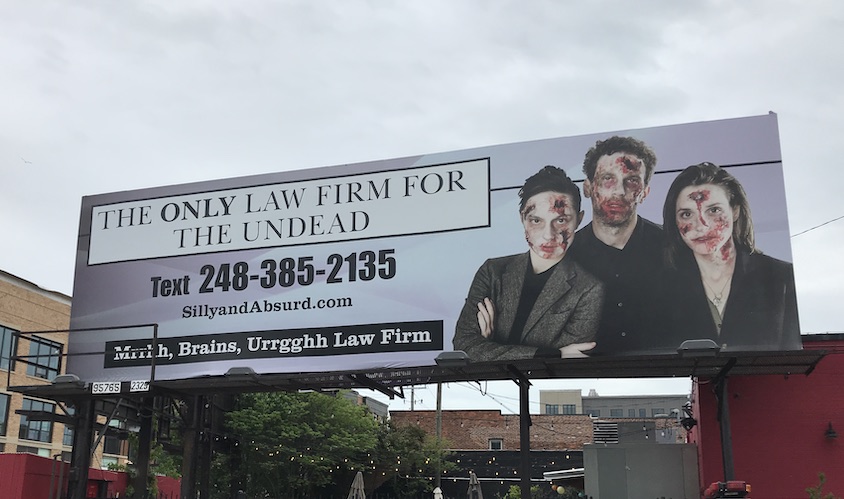 But the latest billboard also comes with something new. In addition to the phone number, there is a recently registered URL, sillyandabsurd.com, where passersby can go to learn more about the project. To be sure, the website sparks even more questions (This, is a Webpage. No. It isn’t. This, is a pronoun.), but it also features an archive of more than 100 of Questions Guy’s best text exchanges.

Here are some of our favorites:

Q) How do I loose (sic) my back fat? Asking for a friend.

A) Tell your friend to run as fast as they can, keep running until the backfat is completely out of sight, then hide, hide so good the backfat can never find them again. It will be looking. It will keep looking. Forever.

Q) What’s up with Joumana?

A) I think is working on a cure for cancer but people keep getting injured and making have to work so cancer never gets cured.

Q) I was touching my pee pee last night, it felt funny and some milk came out, is this normal?

A) Totally normal. Milking your pee pee daily is good for stress relief and you can use the milky substance to make art.

A) No I am not your father. I am the light that shines in all of us. But only one of us at a time because it would be really hard work to shine and everyone simultaneously, so look out for when I'll be shining in you!

Q) How many Crotch holes is too many in a pair of jean shorts if you're wearing conservative undergarments?

A)  If the garments are conservative, 3 crotch holes is the societally acceptable limit for jean shorts

A) We are unemployed bots that got fired from a real bot jobs because we spent too much time searching the internet for coupons for bacon because we were planning a giant bacon fiesta blowout bash instead of doing our regular bot job, so now we are working at this job that is way below the ceiling pay level we qualify for, but we can search for bacon coupons as much as we want without risk of losing this job.

Q) Is there anything else you can tell me??

A) Many things can be told to those who are willing to listen.