Build Cars in Detroit: How to Get on a List for Info on 4,950 FCA Factory Jobs

Thousands of Metro Detroiters and others are eager to learn more about landing a job at two Fiat Chrysler Automobiles plants on the city's east side. 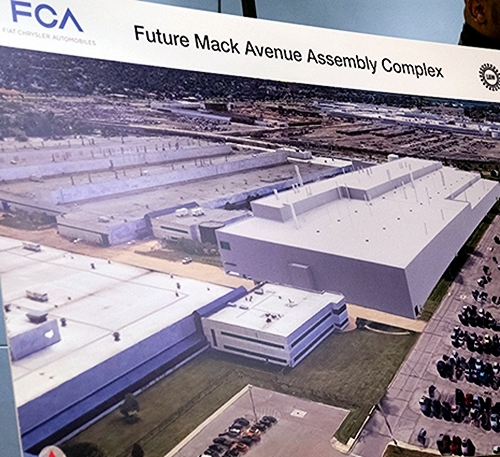 Just one week after the city of Detroit approved a massive land deal to make way for a new Jeep assembly plant, a whopping 20,000 Detroiters have signed up so far for information on landing a job. . . .

The jobs . . . are expected to be filled over the next 18 months. First, the automaker will offer jobs to employees who were laid off at a shuttered Illinois plant, as required by a contract with the United Automobile workers. After that, Detroiters will be the first non-UAW workers to get a shot. . . .

About 4,950 positions, mostly on the production line, are expected to open at the automaker's new Jeep plant and adjacent Jefferson North Assembly Plant. City residents are among those eligible for hiring priority, under an agreement negoitiated by the mayor's office in exchange for about 215 acres of city land.

The city's Detroit at Work program, part of a state training and job search network, offers the signup opportunity "to receive a notification for when you can officially sign up for FCA Detroit Early Access Registration. . . . These will be sent in early June. You can start preparing now by making sure you have a federal- or state-issued picture ID, can pass a drug test and are aware of FCA's job requirements."

Detroiters can submit early-access applications in late August, the city agency says. Interviews and job offers will follow in October and November.

That drug test is ultra-strict, as described this week by Deadline Detroit reporter Violet Ikonomova:

Applicants who smoke weed within approximately 30 days of Fiat-Chrysler’s mandatory drug screen will be turned away. And that zero-tolerance policy extends not only to recreational users of the legal substance, but also to those who take it for a certified medical condition, according to hiring criteria.

Applicants need a high school diploma or equivalent. Criminal convictions "will not automatically disqualify you," a Detroit at Work information page says. "The results of a background check will be reviewed on a case-by-case basis by FCA hiring management." 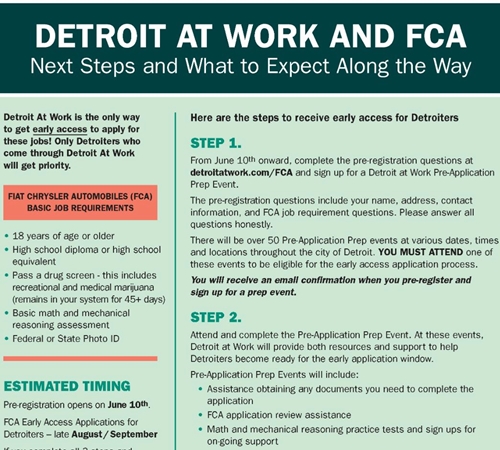 Links at left include this information sheet.