Lengel: Unlike the Ilitches, Golden State Warriors Are Building a $1-Billion Arena Without Public Money 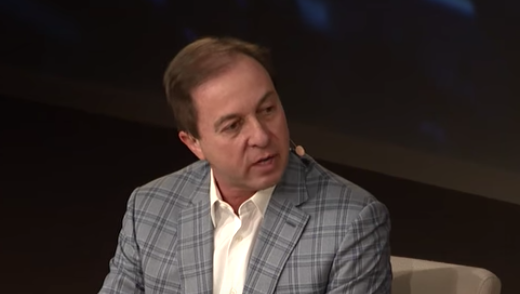 The difference between the fortune of the Ilitch family and Golden State Warrior's majority owner Joe Lacob is a few billion dollars. Marian Ilitch, the patriach of the Ilitch family, is worth $3.7 billion, according to Forbes magazine's latest calculation. Lacob, a venture capitalist at Kleiner Perkins, is wealthy to the tune of about $1.5 billion.

Another big difference: The Ilitch family got a boatload of public funds to build their new hockey and basketball arena: $324 million. And they just got the green light to get an additonal $74 million to develop the area.

Conversely, Lacob is building a new state-of-the-art arena called the Chase Center in San Francisco for more than $1 billion -- and he's financing the whole thing with private money.  The team is playing its last season in the Oracle Arena in Oakland, which opened in 1966 and is the NBA's oldest stadium,.

It's worth noting that the Pistons in the mid-1980s built The Palace in Auburn Hills for $90 million -- all private money. Yes, it can be done locally. But Detroit has seemed comfortable playing patsy to the Ilitch group.

Interestingly, the Ilitches have a similar deal as Lacob in San Francisco: Both don't have to share concession revenues with the respective cities. Makes sense for Golden State because, after all, San Francisco didn't dish out a dime of public funds. Not so with Detroit. (In all fairness, the Ilitches aren't the only greedy billionaires who get money from cash-strapped cities to build stadiums. There's plenty around the country).

The San Francisco Business Times notes that that the Golden State Warriors will generate plenty money for the 18,000-seat arena. Mid-level suites will sell for close to $1 million a year and 60 theater boxes are priced at $350,000 to $525,000 a year, according to the publication. The Warriors will also book more than 200 events a year at the Chase Center, including NCAA West Regional basketball games in March 2022.

Additionally, Golden State Warriors plan to build a hotel and condominum adjacent to the new stadium where the Warriors will play in the 2019-20 season. The Ilitches have had similar plans -- except for the fact they haven't executed them, and lately they've been getting heat from the public because of that.

The National Basketball Association champions have taken in an unprecedented $2 billion in the form of tickets, suites and sponsorships, more than double the franchise’s estimate for the privately financed Chase Center in San Francisco, according to team President Rick Welts. . . .

The Warriors have become an example of how to build a new arena with private money, rather than the government subsidies demanded by many pro teams.

San Francisco has had it share of financial woes over the years. So has Detroit. But San Francisco hasn't ever filed for bankrputcy. Probably helps that it doesn't easily throw tax payer funds at the feet of billionaires

It's clear, Detroiters have been treated like chumps for far too long -- and unfortutnately, by some we've long considered our friends.