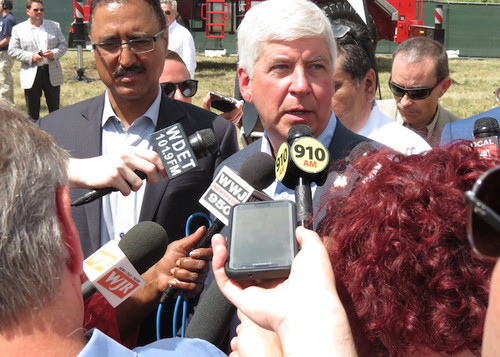 Investigators in the Flint water crisis have seized from storage the state-owned mobile devices of former Gov. Rick Snyder and 65 other current or former officials, The Associated Press reports:

The warrants were sought two weeks ago by the attorney general's office and signed by a Flint judge, according to documents the AP obtained through public-records requests.

Solicitor General Fadwa Hammoud and Wayne County Prosecutor Kym Worthy, who is helping with the probe, confirmed they executed a series of search warrants related to the criminal investigation of Flint's lead-contaminated water in 2014-15 and an outbreak of Legionnaires' disease. They declined further comment.

One warrant, signed May 19, lists all content from Snyder's cellphone, iPad and computer hard drive. Similar information was sought from the devices of 33 employees who worked in his office, 11 in the Department of Environmental Quality and 22 in the Department of Health and Human Services.