General Motors to The New York Times: 'You seem fixated on seeding doubt and despair'

GM's top communications executive tells The New York Times what he really thinks about coverage of cutbacks by the automaker. 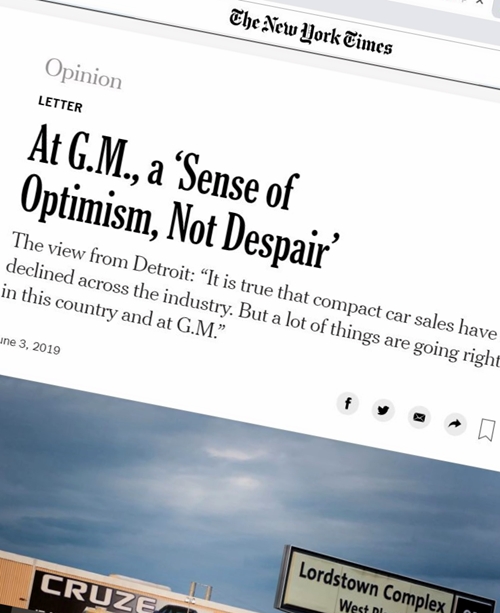 "You seem fixated on seeding doubt and despair," Tony Cervone writes in a letter to the editor. He just started his fifth year as senior vice president for global communications, and cites "extensive" coverage of "the end of Chevrolet Cruze production and the possible sale of our Lordstown (Ohio) Complex."

What has been missing is any sense of optimism. . . .

It is true that compact car sales have declined across the industry. But a lot of things are going right in this country and at G.M. The economy is robust and at full employment; demand for G.M.’s trucks and crossovers is strong; there are thousands of well-paying G.M. jobs available at other plants; and there is a prospective buyer for the Lordstown plant that wants to build electric pickup trucks in partnership with the United Auto Workers.

Cervone, who claims three articles last month have an "unrelenting focus" on negativity, notes that "close to 850 people [at Lordstown] have accepted offers to relocate to another G.M. facility, while others are retiring with their pensions."

Tony Cervone: "A lot of things are going right in this country and at GM." (Company photo)

A sale of the plant to a new company affiliated with Workhorse Group is the best opportunity we have found to keep vehicle production at the site. . . It is better positioned than most electric vehicle start-ups. . . .

There is a significant opportunity for the local community and Ohio to be at the forefront of tomorrow. This should drive a sense of optimism, not despair.

Cervone has local roots as a graduate of the former Notre Dame High School in Harper Woods, a Catholic school that shut in 2005, and of Central Michigan University ('85). He was inducted two years ago into CMU's Journalism Hall of Fame.