LeDuff: Jordan and Rashida Find Their Saviors -- Checks are written and the Detroit house is saved 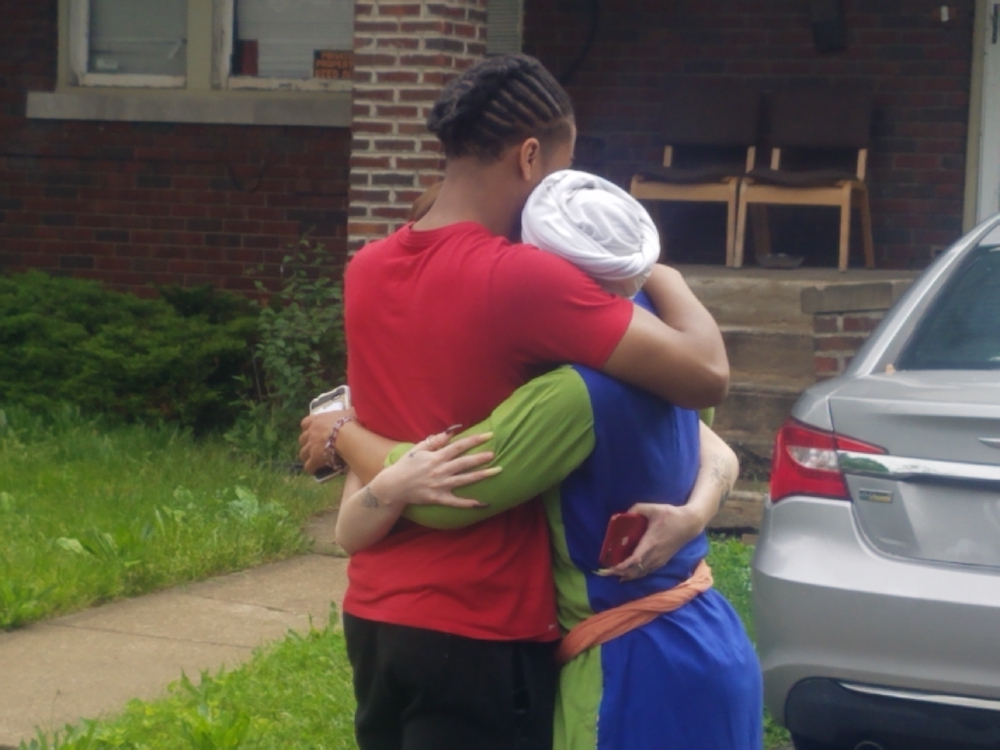 Rashida Bennett-El and her son Jordan.

The sheriff was set to take possession of the home in less than five hours.

Soon he'd toss the family's belongings to the curb and padlock the door. The dressers, the rocking horse, the sippy cups. Then the woman and her children would be put on the street. Another Detroit family on the drift.

But what constitutes a miracle around here happened for a black woman who had paid faithfully on the house for 10 years before falling ill and falling $1,622 behind on the mortgage.

Three anonymous white men stepped up to help after reading about her struggles and those of her son Jordan in pages of Deadline Detroit.

A man who wishes only to be identified as Tom sent the bank a check for $3,192.84 cents – which included the late penalties. It reached the bank just hours before the modest brick home in the heart of Detroit's poverty was set to go to sheriff's auction.

Tom describes himself as a middle-aged, middle-class white guy with political views that skew towards the middle of the road. He lives in a middle-class house in Midland, Mich., in the heart of the Midwest.

'Maybe it won't be too late'

Tom called me yesterday to check in: “Increasingly, I get the overriding feeling that I was lucky to be born white, to be born male and grew up in a time that if a guy like me worked hard, he'd live the great middle-class life,” he said.

“That's not the case for anybody anymore,” said Tom, who grew up in Flint when the factories were still banging out Buicks. “My son has lost three jobs to layoffs. America's not about we the people anymore, so I figured after reading about the family, I'd do something to help someone else. We're looking to the people who blew the place up to fix it. They're not going to do it. So maybe if we all stick together a little more it won't be too late in America.”

I agree with Tom. It isn't too late in America. We're better than the TV screen tells us we are. Many people contacted me wishing to help. Black, white, brown. Men. Women. United we stand.

No one bothered to ask him what happened to the $250 million the federal government spent to remove the blight next to Rashida's house. No one bothered to ask why the business elite don't pay taxes on their new projects while simultaneously dipping into the pockets of taxpayers like Tom and Rashida to ensure their profits.

Like Tom says, we don't hate women and children coming to America seeking a better life. But what we're asking is what about our children? What about Rashida's children?

“My parents taught me take care of my neighbor,” Theodore said. “It's something I could do with the skills I was lucky enough to obtain for someone who doesn't have those opportunities. That and my faith. Look out for my neighbor. And she is absolutely my neighbor.”

In Theodore's view of the world, there should be no Eight Mile Roads.

“Whether you're from El Salvador or here in the city. Make life a little better for one another,” he said before thanking me and hanging up.

That's where Lew the advertising man comes into this story. He wrote Rashida checks for the next two months. I brought him to her house so he could do it personally.

“McDonald's didn't call back,” Rashida said with a shrug.

Meaningful for each person

“I hope these help,” Lew said, handing over the paper to Rashida. Her son Jordan shook Lew's hand and thanked him. The boy talked about his future plans for a career in marketing. Lew gave the kid his number and later sent the kid his resume, so the kid would know what one looks like. As we drove away, it seemed to me the meeting meant as much to Lew as it did the family.

“I'm stunned,” said Lew as he looked through the windshield at the family with it's arms wrapped around itself. “Here's a kid who is smart and sincere. She too. They have a plan. That plan hit a speed bump and we helped get them over it is all.”

I called Lew a few days later. He spoke of luck and family.

“I grew up in Grosse Pointe Farms,” Lew said. “I didn't have any roadblocks in my plan. Not a single one. All I had to do was keep my nose clean and I was fine. I didn't have to worry about the house payment or my mom. Never heard about it. I wish I had the conviction Jordan has when I was his age. I wish I had as much as he does inside him. Luck of the draw. I have a feeling he'll get what he's seeking someday. We all need some help sometime.”

No truer words could be spoken.

Now what about the 14,000 families in the city who are at risk of losing their homes to tax foreclosure alone? There aren't enough good Samaritans in the world to handle all that.