The 2019 measles outbreak in Oakland County has officially been declared over by health officials, nearly four months after the first cases were reported in the densely populated suburban county. 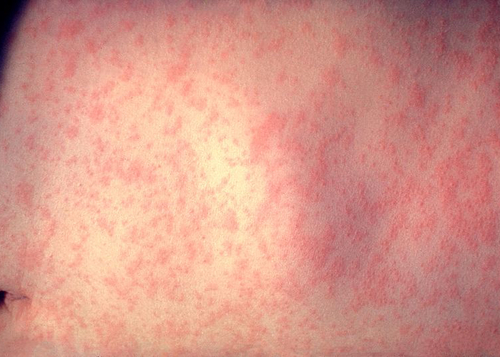 What measles vaccine refusal can look like (Photo: Wikipedia)

Fox 2 Detroit reports that 44 individuals were stricken, ranging in age from eight months to 63 years. The outbreak began when a traveler from Israel, by way of New York City, arrived in the area carrying the highly contagious, vaccine-preventable virus. Health officials administered 3,300 vaccines and held clinics in affected areas.

"The end of this outbreak is a true testament to the work of Health Division staff and our invaluable community partners," Leigh-Anne Stafford, health officer for the Oakland County Health Division, said in a press release. "We are thankful that this outbreak has ended, and hope it also serves as a reminder of how important getting vaccinated is to prevent future outbreaks in Oakland County."

Lots of others hope so, too, but the anti-vaccine movement, largely responsible for the re-emergence of the disease, shows no sign of flagging, and continues to spread the false contention that vaccines can cause autism in infants and other serious health effects. In Oakland County, the outbreak was greatest in the Orthodox Jewish community, where some believe vaccination is contrary to Jewish law, although religious authorities say that, too, is a false belief.