Bad news: The state legislature is continuing to fight over funding to repair Michigan's atrocious roads, and is unlikely to reach a consensus anytime soon. 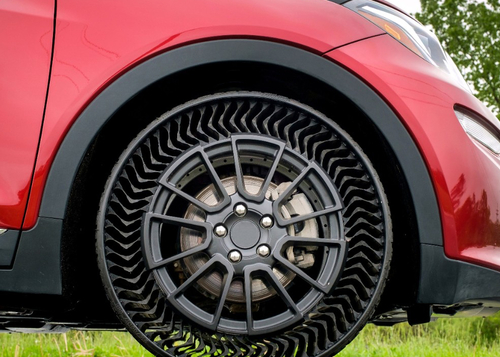 No air, no problem. (Photo by Steve Fecht for General Motors)

Good news: Maybe, by the time they agree to throw a few dollars into the yawning potholes flattening your tires, you can drive on an airless tire.

The Free Press reports that General Motors plans to test a prototype airless tire on Michigan roads, and we can't think of a better place to to do:

The automaker is teaming with Michelin and this week introduced the Michelin Uptis prototype at the Movin' On Summit for sustainability in Montreal. Uptis stands for Unique Puncture-proof Tire System, GM said.

GM will start real-world testing of the prototype tires later this year on a Michigan test fleet of the Chevrolet Bolt electric cars. A spokesperson for GM said the carmaker and Michelin will evaluate the Uptis prototype for other GM vehicles, and announce which other cars might get them at a later date.

GM said the airless technology means the prototype will not get flats or blowouts. In turn, that could mean less use of raw materials and waste, contributing to GM's refrain of its vision for a world with zero crashes, zero emissions and zero congestion.

The tire could also last longer than conventional types, because under- or overinflation wouldn't be a factor in its wear.

No price has been set. The state's roads, however, are still crying for more than $2 billion per year.

Have a nice day.