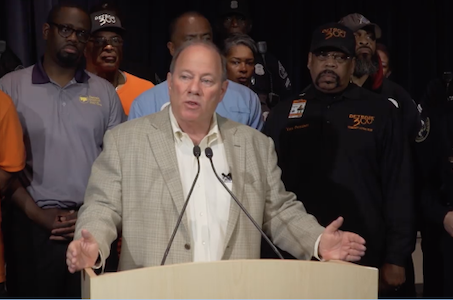 Update: 8:08 p.m. Friday -- A homeless 34-year-old man, who has been described as a person of interest in the serial killer case, has been taken into custody, the Detroit Free Press reports Friday night.

The person was identified as DeAngelo Kenneth Martin, who is known to be homeless and frequent the east side.

Martin was found  at a bus stop in the area of 7 Mile Road and Gratiot, Friday evening at 7:30 p.m., police tell the Freep.

Detroit Mayor Mike Duggan announced Friday that 40 neighborhood police officers would be searching in teams of teams of two in every open and abandoned home in the next two weeks.

On Wednesday, Police Chief James Craig said three women have been killed since mid March and all of them were lured into abandoned homes, raped, and then killed.

Board up teams are working overtime to board up every abandoned home on the east side. Police will search each home before it is boarded up. If you have homicide tips for @detroitpolice, call 313-596-2260. For homes with boards that need to be replaced, call 313-267-4600. pic.twitter.com/FtChKOUCEn

Clergy, activists and grass roots groups have been hitting the streets on Detroit's east side in search of someone Police Chief James Craig suspects is a serial killer responsible for the murders of three women who were believed to be sex workers.

Members of the coalition Thursday searched abandoned houses, solicited tips, distributed literature and advised women to be on guard.

"I watched women walk by themselves at 10:30 in the dark, walking the streets going to the gas station," Pastor Maurice 'Mo' Hardwick tells Fox 2's Randy Wimbley. "That has to stop."

"I don't know how to define these women but they're women," said Eric Ford, Detroit 300 Community Action Team. "But we have to get out here every day until we get this guy off the street."