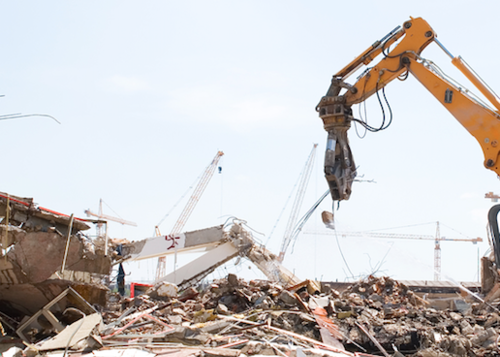 In his May 30 speech at the Mackinac Policy Conference, Duggan unveiled a plan to seek taxpayer approval for a bond issue that would let the city keep up the pace of demolitions when its allotment of federal demolition dollars runs out around the end of this year. The city claims that at that point, it will have 18,000 blighted houses left to demolish. It has spent more than $200 million demolishing about 18,000 since the program began in 2014.

But a key cause of blight is tax foreclosure, and the number of Detroit households on the brink (those two or more years behind on their taxes) has steadily remained in the tens of thousands. That's why, Kaffer writes, in order to avoid throwing money into "a bucket with a hole in the bottom," there must be a policy solution to keep those people from losing their homes.

It's true that the number of tax foreclosures in Detroit have dropped about 88% since 2015. But the number of tax-delinquent homes has fallen by only 13%, according to an analysis published this year by the Quicken Community Fund, the philanthropic arm of mortgage Dugganlender Quicken.

The city recently settled a lawsuit with the ACLU that alleged it made that  exemption — which lets people living in poverty avoid property taxes — too difficult to access. As part of that settlement, it has agreed to streamline the process.

And this is where the Legislature could help.

The tax-foreclosure auction is mandated by state law, just like the poverty property tax exemption. So the state Legislature could pass legislation enabling cities to make the poverty exemption retroactive, allowing Detroiters who should have been receiving the exemption for years to wipe out years of back taxes most can never hope to pay — and enabling those homeowners to pay for other important stuff, like water bills, or home repairs.

The correlation between foreclosure and blight is obvious. When a house is foreclosed, it often goes vacant. It deteriorates the longer it sits. But there's also data to back up that premise. Last year, in a story on the status of the city's vacant houses, Metro Times reported that the worse a house’s condition, the more likely it is to have gone through foreclosure:

And of course, the process wastes money ("Money. Bucket. Hole." as Kaffer puts it). In 2017, almost 2,800 owner-occupied homes in Wayne County were foreclosed for less than $1,000 in back taxes, according to an analysis by Bridge Magazine. The average demolition costs more than $11,000.