Ex-Michigan Gov. Rick Snyder: Stories Are Misleading. I Had Already Turned Over my Phone & Computer 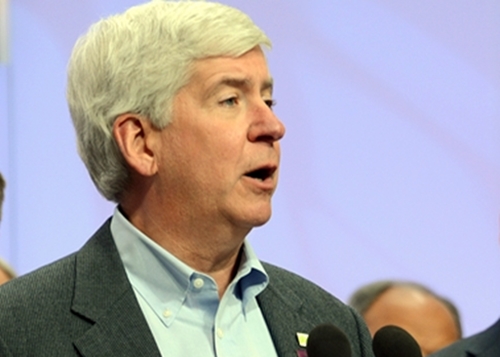 But Snyder and some laywers are crying foul, according to  Detroit Free Press columnist Brian Dickerson.

"The stories coming out about my state phone and computer are very sloppy and misleading," Snyder tweeted the other day. "I gave my phone and all that stuff to the AG's office before I left office.  Why the AG's office is executing a search warrant on itself I cannot say."

Others lawyesr say their clients' government devices seized recently had already been turned over to invetigators and returned after hard drives were copied, according to Dickerson.

People who anticipated that the new AG would quickly begin winding down the criminal probe her predecessor initiated have been startled in recent weeks by a flurry of announcements in which the lawyer Nessel appointed to take over the criminal probe:

• Charged that Flood had botched the discovery process and neglected to secure or examine relevant evidence;

• Accused assistant attorneys general responsible for complying with Flood's subpoenas of colluding with defense attorneys and concealing millions of documents from investigators in a basement.

Under Todd's direction, 15 people have been charged in the Flint probe. Seven mid-level bureaucrats have cut misdemeanor plea deals that will leave them without criminal records, and Dickerson notes that "it's unclear when, or whether, the remaining eight defendants —  including former state health director Nick Lyon and three others charged with involuntary manslaughter — will ever stand trial."