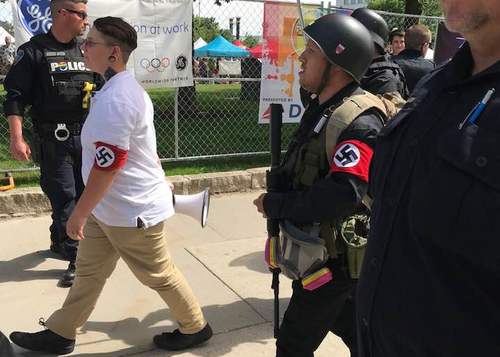 The Guardian, a U.K.-based newspaper with a strong online presence in the U.S., reports that a group calling itself the National Socialist Movement "held placards, gave Nazi salutes and displayed armbands with swastikas." A wire-service photo shows one black-clad white supremacist urinating -- or appearing to urinate -- on an Israeli flag.

Another video, by Facebook user Syd Gossett, showed the march escorted (and outnumbered) by a phalanx of Detroit police officers, which The Detroit News reported was to keep the group from clashing with others:

Otherwise, the celebration at Hart Plaza appeared peaceful. Around 25,000 were expected over two days, making Motor City Pride the largest event of its kind in Michigan.