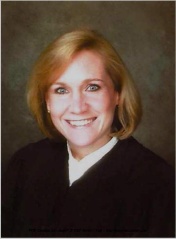 Now, the final hammer appears to be on its way.

Punishment could be anything up to termination.

Steenland was sentenced in  November by Judge Michael Hulewicz in 72nd District Court in Marine City to probation and 50 hours of community service on each count and fined $1,000 after pleading no contest to leaving an injury accident and failure to report an accident, the paper reports.

The judge was driving a red Dodge Charger the evening of Sept. 25, 2017, when she struck a Chrysler 300 near a turn-around on Gratiot Avenue at Masonic Boulevard and drove away.

In 2008, she was suspended without pay for 90 days after pleading guilty to impaired driving for an incident in northern Michigan.